Who were the Phoenicians? West Asian history

The Phoenicians: Phoenician glass – a face pendant of an African man. 400-200 BC

Phoenicians in the Late Bronze Age

Sometime in the Late Bronze Age, around 1300 BC, a group of Semitic people living on the Mediterranean coast in modern Lebanon became more important than they had been before. These people, who had been called Canaanites, were now called the Phoenicians (foy-KNEE-shans). They became more important because the kingdoms which had been controlling them before (mainly the Egyptians, the Hittites, and the Assyrians) got weaker. So the Phoenicians were able to get a little stronger and more independent. 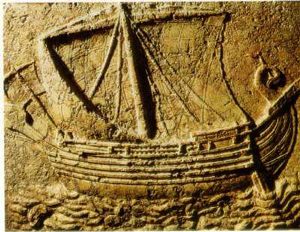 The Phoenicians became excellent sailors, and traded all over the Mediterranean, including to Greece.

During the Dark Ages, the Phoenicians got even stronger and began to start colonies all over the Mediterranean: new cities in new places with Phoenician people living in them. One of the most important of these colonies was Carthage, in Africa, but there were many others. 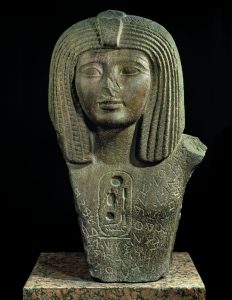 Pharaoh Osorkon I with hieroglyphics and an alphabetic inscription. Ca. 924-895 BCE. Egyptian, found in Byblos, now in the Louvre.

Iron and the Alphabet

After the Dark Ages, in the 800s BC, the Phoenicians started to use iron. They traded with the Greeks again, and now also with the Etruscans. They learned the alphabet and taught it to their trade partners.

In 332 BC Alexander the Great attacked the main Phoenician capital, and the head of the Persian navy, Tyre (like a car tire). After a long siege, he captured Tyre, and the Phoenicians became part of his empire.

Bibliography and further reading about the Phoenicians:

The Phoenicians, by Elsa Marston (2001). For teenagers.

The Phoenicians, edited by Sabatino Moscati (2000). A good summary, even though it’s not specially for kids.

The Phoenicians and the West : Politics, Colonies and Trade, by Maria Eugenia Aubet (1993, revised 2003). Mainly about the Phoenician colonies in Spain.

Ancient Near Eastern History and Culture, by William H. Stiebing (2002). Expensive, and hard to read, but it’s a good up to date account. A college textbook.