The very first people to arrive in China from Africa about 50,000 BC probably already knew how to swim. People in China were certainly swimming by the time of the Eastern Zhou Dynasty, about 750 BC, because the Book of Odes has a proverb telling people to “Row across if it is is deep and swim across when it is shallow.” In the picture, military divers are swimming underwater to stave in and sink enemy ships. 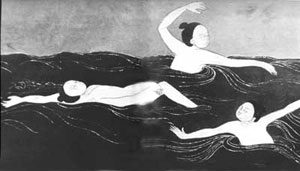 Like people in other parts of the world, people in China used the crawl stroke.

By 500 AD, swimmers in China could also do the back crawl, as you can see in this picture. Like people everywhere else in the world at this time, everybody in China swam naked.

During the Song Dynasty, acrobats started doing fancy dives off swings. There were swimming competitions, and people surfed in the waves at the mouth of the Yangtze River, just like they did on the other side of the Pacific Ocean in Hawaii.

Swimming in North and South America
Swimming after 1500 AD