The first lifeguards were in China

The Qing Dynasty rulers of China came from Central Asia; they weren’t swimmers. Under their rule, very few people in northern China could swim. In 1708, the Qinkiang Association for the Saving of Life established the first lifeguards anywhere in the world, but this was mainly to save people who fell out of boats, because most people couldn’t swim. Qing Dynasty swimming in China was pretty lame.

Swimming and the Chinese Revolution

When the Chinese Revolution came, revolutionaries showed how different they were from the Qing Dynasty by learning to swim. They didn’t learn to swim very well though: in the time of Chairman Mao, in the 1900s, most people in China swam using the breaststroke, not the crawl stroke they had used in the Middle Ages. Many people in China wanted to act like they could swim, but most people were not good swimmers. The government built some swimming pools – indoor pools and outdoor pools – but not nearly enough of them for everyone to swim in. Ponds and streams became too polluted to swim in safely. 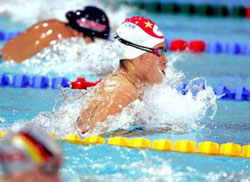 Luo Xuejuan swimming the breaststroke at the Olympic Games (2004)

Did you find out what you wanted to know about Qing Dynasty swimming? Let us know in the comments!