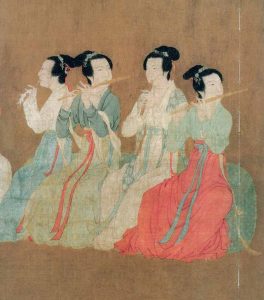 Like Bai Juyi, the poet Xue Tao was born in China during the T’ang Dynasty. She was a little older than Bai Juyi; she was born in 768 AD, during An Lushan‘s rebellion.

Who was Bai Juyi?
More Chinese literature
All our China articles

Xue Tao’s father also worked for the government. But Xue Tao’s life was very different from Bai Juyi’s life, partly because her father died when she was still a little girl, and partly because she was a girl and not a boy.

She meets poets and artists

Because Xue Tao was a girl, she couldn’t go to school the way Bai Juyi did. When Xue Tao’s father died, her family sent her to be a singer and dancer for men’s parties.

There she met a lot of artists and poets, and she started to write poetry herself. A powerful general helped her out, and another poet seems to have been her boyfriend.

Xue Tao wrote at least 450 poems, but only 100 of her poems are still around today for us to read. Many other poets read her poems, and asked her to read their poems. She became a famous poet.

Here is a poem Xue Tao wrote about the moon (thanks to Tony Barnstone and Chou Ping for the translation):

Its spirit leans like a thin hook
Or opens round like a Han-loom fan,
slender shadow whose nature is to be full,
seen everywhere in the human world.

How should we understand Xue Tao’s moon poem? Is the moon a metaphor for herself – a woman, who should live her life as a shadow, where men can’t see her? Xue Tao was seen everywhere. Is she ashamed of that, or bragging about it, or both? Or is the moon a metaphor for the family, which should be full like the full moon? But Xue Tao lost her father and mother – her family was only a shadow, like the new moon. Or is she more interested in connecting folding fans (which were still pretty new then) to the moon, and to women and family?

When Xue Tao got older, she seems to have started a paper-making business, making paper for poets to write on. So in the end she was able to support herself even without help from her family or from school. When she got older and sicker, she retired to live alone as a Taoist.

History of paper
What is Taoism?
The T’ang Dynasty

Xue Tao died in 831 AD, when she was 63 years old, still under the T’ang Dynasty. She had a harder life than Bai Juyi, who lived to be 74 years old.