A Chinese musician playing a qin 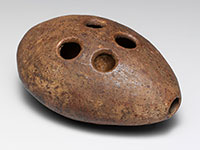 The first people who came to China, about 50,000 BC, brought their music with them from Africa, by way of India. These people certainly clapped their hands and sang songs. Probably they brought drums and bone pipes with them to China.

Chinese tradition says that a man named Ling Lun, perhaps during the Zhou Dynasty, about 1000 BC, invented the earliest musical instruments in China, bamboo pipes that imitated the sounds of birds. But really people were certainly playing drums and pipes as early as the Shang Dynasty, about 1800 BC.

The philosopher Confucius, about 500 BC, said that music should be a way of calming people down and making it easier for them to think. Many later Chinese composers agreed with Confucius. Because of this, people respected official music much more than popular music.

Under the Qin Dynasty, about 200 BC, the Chinese emperors started an Imperial Music Bureau to oversee all kinds of music. Perhaps around this same time, someone invented the qin, a Chinese stringed instrument like a zither.

The Han emperors, starting about 100 BC, told the Imperial Music Bureau to work on court music and military music, and also to keep track of folk music. They were especially interested in keeping track of political protest music, and sent music officers out to listen and collect popular music. They tried to stop revolts by controlling music.

With the rise of Silk Road trade, Chinese musicians began to get ideas from Central Asian musicians. Han Dynasty musicians turned the Central Asian pear-shaped lute into the Chinese pipa, plucking the strings with a pick or with their fingernails.

During the T’ang Dynasty, about 700 AD, musicians wrote a lot of new music for the qin. People kept playing the pipa too. Then in the 900s AD, another new idea came from Central Asia: Chinese musicians began to use a bow to play an early stringed instrument – the erhu, with only two strings.

Learn by doing: go to a concert of classical Chinese music
Find out about Central Asian music