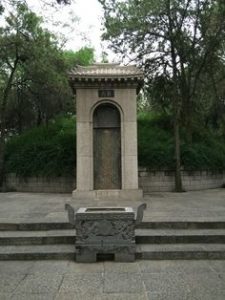 The tomb of Bai Juyi

Who was Bai Juyi?

Bai Juyi was born in China during the T’ang Dynasty, in 772 AD, just at the end of the great rebellion of An Lushan and not long after Xue Tao was born.

Juyi’s father worked for the government – he was educated, not a farmer – but he was not very powerful. Like many people in China at this time, Bai Juyi was a Buddhist.

Soldiers were still fighting, and when Juyi was ten years old a war came to where he was. His parents sent him away to live with relatives where it was safer.

Because Bai Juyi was a boy, he could go to school, unlike Xue Tao. Bai Juyi did very well in school and passed his examinations, so he got a job in the government too.

In 821, when Bai Juyi was almost fifty years old, he became the governor of Hangzhou, where he got a big dam built that helped the farmers irrigate their farmland.

But while he was a governor Bai Juyi also wrote poetry. He wanted to write poetry that everyone could understand, in simple words. Because his poems were easy to read, and because he wrote about how government officials were mean to farmers, his poems were very popular. Bai Juyi’s most famous poem is the Song of Everlasting Sorrow. Bai Juyi also wrote poems called “The Grain Tax” and “The Philosopher” (about Lao Tsu) – and many other poems.

The Grain Tax
The Philosopher
The Song of Everlasting Sorrow

Retirement to a Buddhist monastery

When Bai Juyi was about 60 years old, he retired to a Buddhist monastery and lived there, still writing poetry. He lived to see the beginning of Emperor Wuzong’s great persecution of Buddhists in 840, and died at the age of 74 in 846 AD.

What is a Buddhist monastery?

Learn by Doing – Write a Poem