History of Democracy: Who invented democracy? 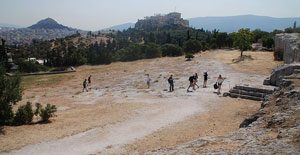 History of Democracy: The Pnyx, where Athenian men debated issues and voted

Democracy means the rule of the people (in Greek). That is where each individual person has a vote about what to do. Whatever the most people vote for wins. There is no king or tyrant, and anybody can propose a new law.

What is a tyrant?
What is a king?
More Greek government
All our ancient Greece articles

Who gets to vote?

One problem that immediately comes up in a democracy is who is going to be able to vote. Should people vote who are just visiting from some other city-state? What about women? Poor people? Enslaved people? People in jail? How about little kids, should they vote? Or should there be some limits? How will the democracy keep the majority from oppressing minorities – what will protect smaller groups?

What is a city-state?
Women in ancient Greece
Ancient Greek slavery

History of democracy: Potsherd used to vote for Themistocles (can you see his name written on it?)

The earliest democracy in the world began with the work of a man named Cleisthenes, in Athens, in 510 BC.

In Athens, the government let all the free adult men who were citizens vote, rich or poor. That was great for poor men – as long as they weren’t slaves – but bad for women, who were pretty much shut out of the political power they had had in the Archaic period.

Archaic Athens
How about Corinth?
Democracy in Thebes
But not in Sparta

When democracy turned out to work in Athens, many other city-states chose it for their government too. But most of them allowed even fewer people to vote than Athens did: most of the other city-states only allowed free adult male citizens to vote IF they owned land or owned their own houses (that is, the richer people). They didn’t let women vote either.

The Council of 500: choosing by lottery

One big problem for democracies was that it was very inconvenient for men to always be going to the meeting-place to vote. Most men had work to do, planting their grain, making shoes, fighting wars or whatever. They couldn’t be always debating and voting.

So most democracies sooner or later ended up choosing a few men who would do most of the voting, and the rest only came when there was a really important vote. It was hard to decide how to choose these few men, and different cultures did it different ways. Athens did it by a lottery. If you got the winning ticket then you were on the Council of 500. Men served for a year (and women couldn’t serve at all).

Democracy spread around the Mediterranean Sea, but it was pretty much wiped out by the Roman Empire about 100 BC. Still, places like Athens continued to use democratic methods to make their own decisions on local matters for a long time after that.

A thousand years later, in the Middle Ages, some cities in Italy – Siena, Florence, Genoa, Pisa, Venice – went back to having a democratic government after Matilda of Canossa died.

These democracies were all organized in slightly different ways, but none of them allowed the poor, women, or children to vote, and some had a lottery system like Athens. Further north in England, some men got the right to vote for local officials and for their representative in Parliament in the Middle Ages, but the king still held most of the power. 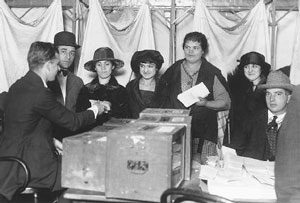 These Italian democracies, too, were eventually conquered by the Holy Roman Empire and ruled by German emperors.

Meanwhile in North America and in Africa, many people had organized themselves in towns and villages where the leader had no power to force anyone to do anything. Leaders could suggest building a wall or fighting a war, but people chose themselves whether they wanted to work or fight.

Early Mandan
The Guarani
The Khoikhoi and the San

History of democracy:  Britain, France, and the United States

In the 1600s, Europeans saw more of these American and African people. They didn’t have to do what the king said. Soon Europeans started to fight for democracy again. In England, Cromwell seized power for Parliament. Thomas Paine and Mary Wollstonecraft wrote about human rights.

In America, the Revolutionary War brought the Constitution in 1789, which let free adult men vote if they owned their own farm or business. A few years later, the French Revolution brought democracy to France (for a short time).

Today many countries are democracies, and in most of them poor people, people of color, and women have now won the right to vote, though children and foreigners still can’t.  Some places are experimenting with letting 16 year old people vote. The amount of power available to voters, however, still varies widely from country to country, and many countries, like Saudi Arabia, are still not democratic at all.

Did you find out what you wanted to know about the history of democracy? Let us know in the comments!

Learn by doing: hold a democratic debate and election in your classroom or family
More about republics

Bibliography and further reading about the history of democracy: