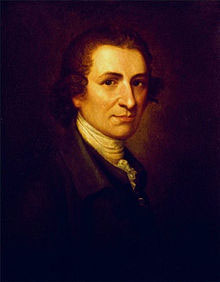 Paine was born in England, and his father was a Quaker, and owned a small business. Young Paine didn’t go to school much, and he tried a bunch of different jobs without succeeding anywhere. When Paine grew up, he got married, but his wife died having a baby, and the baby died too. Paine got into politics in England, writing a pamphlet about how people should get fair pay for their work. He ran a tobacco shop, but it failed, and his second wife left him. When Paine was 42 years old, Benjamin Franklin helped him leave England and sail to America, which was still a colony of Britain.

Almost as soon as he got to America, Thomas Paine wrote a short book – a pamphlet – called Common Sense which was published in January, 1776 and became an immediate best seller. Everybody was reading it. Common Sense repeated a lot of John Locke‘s ideas about human rights, but in simpler words that everybody could understand, like a church sermon. Paine agreed with Locke that it was right for people to revolt if their government was bad. But Paine went further than Locke. Locke imagined people giving up these rights in exchange for safety and security under a government. But Paine wanted to create a government where every man would keep his human rights and freedom. During the Revolutionary War, Paine wrote a lot more articles that George Washington used to inspire the Army to fight. 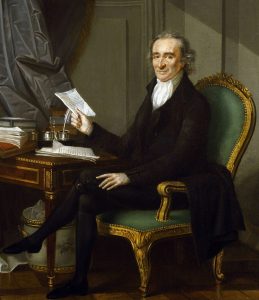 Thomas Paine about 1791 (by Laurent Dabos)

But after the American Revolution, Paine found that the men writing the Constitution rejected most of his ideas. Paine wanted everybody to be able to vote. He thought slavery was wrong. He wanted more of a democracy and not a republic. And he thought people had a right to have their government support them if they needed help. But he lost those fights. Around 1790, Thomas Paine went back to England. He hung out with Mary Wollstonecraft there, and supported the rights of women as well as men, though not as a big priority.

When Thomas Paine got out of prison, he published another book, The Age of Reason. A lot of people read it, but most of them didn’t like it. Paine argued that religion was silly and wrong, and people didn’t like that. He said that slavery was wrong, and a lot of Americans didn’t like that, either. So by the time Paine died of dementia, in 1809, when he was 77 years old, he was both unpopular and nearly forgotten.