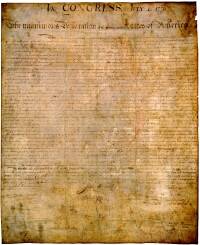 Who wrote the Declaration of Independence?

In 1776, soon after the beginning of the American Revolutionary War, the leaders of the war got together to write a letter to the King of England, George III.

Why did they write it?

They wanted to explain why they were fighting to be their own country, independent of England. This is what they had to say (but in easier words).

What the Declaration of Independence says

Sometimes one group of people decide to split off from another group, and to become an independent country, as the laws of Nature and of God say that they can. But when this happens, if they want other people to respect them, they should explain why they are splitting off.

We think these things are obviously true:

So whenever any government is getting in the way of these rights, people have the right to change it or get rid of it, and to make a new government, in whatever way seems most likely to make them safe and happy.

We tried to get along with England

People should not change their government without a good reason, so people usually suffer as long as they can under the government they have, rather than change it. But when there have been a lot of problems for a long time, it is their right and their duty to throw off that government, and to set up a better government.

A list of bad things the King did to us

We here in America have suffered for a very long time, and now we should change our government. The king of England has done many bad things to us – here is a list:

When we ask him to stop, he just keeps on doing more bad things. We have tried to talk to the other people who live in England. We asked them to stop these crimes against us, but they have acted as though they were deaf. So we have to separate from England, and they will be our enemies during the war, though we hope they’ll be our friends when there is peace.

So this is what we’re going to do

So we think that God will see that we are doing the right thing when we declare that the United States are now completely independent of the King of England. We have no more political connection to England at all. And as independent states, we say that each state has the right to make war, to make peace, to make alliances with other countries, trade with other countries, and do everything else that countries do. And we promise that we will fight for our independence with the help of God – we promise by our lives, our property, and our sacred honor.

Looking for a Halloween costume? Go as a Revolutionary War soldier!

Who signed the Declaration of Independence?

Among the men who signed this declaration of independence were Benjamin Franklin and Thomas Jefferson.

What’s so interesting about it?

The Declaration of Independence was an exciting letter to write – it laid out a lot of new ideas about the rights that all people should have. On the other hand, all of the people involved in writing the Declaration were rich white men.

So does it include everybody?

Even though they thought they themselves should have these rights, they were pretty vague about whether the same rights should apply to poor people, women, black people, or Native Americans – most of the people living in the United States at this time.

Representatives of all these groups asked to be included, and some white men started out supporting their inclusion, but in the end, only rich white Christian men signed the Declaration of Independence.

But even though the Declaration of Independence only applied to some people, it was a very important statement of the idea that everybody has rights.

Did you find out what you wanted to know about the Declaration of Independence? Let us know in the comments!

Learn by doing: which of these are good reasons? Why?
More about the American Revolutionary War

Bibliography and further reading about the Declaration of Independence: