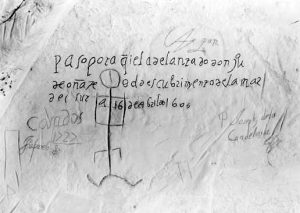 Early American government: Juan de Onate, the first Spanish governor, marked this rock in New Mexico to show he had been there (1605).

American government in the 1500s

Throughout the 1500s, the governments of North America were a lot like they had been before 1500. But two important things changed.

The other thing was that five different groups of the Iroquois got together and formed the Iroquois Confederacy. Members of the Confederacy all agreed not to fight with each other.

The Iroquois Confederacy
The Algonquin
And the Cherokee

They would defend their land all together as allies. This made the Iroquois much stronger than they had been before. They were able to push the Algonquin further north into Canada, and the Cherokee further south. 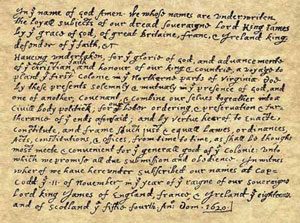 During the 1600s, the first English settlers began to arrive on the East Coast. These groups set up their own governments.

Charles and Cromwell in Britain
The Puritans

Their governors were responsible to King Charles in England, so they were also part of a monarchy. One example of a written agreement to set up a government is the Mayflower Compact.

Further north, the French settlers who arrived at this time were under the rule of the French king – Louis XIV. Most of them settled in what is now Canada.

Or they followed Native traders up the St. Lawrence River and through the Great Lakes. They settled in Detroit and all down the Mississippi Valley as far as New Orleans.

The Iroquois continued their confederacy. All over the rest of North America each group of people continued their own system of government. But in the end of the 1600s the Pueblo people threw out the Spanish settlers in the Pueblo Revolt. They took Spanish horses and sold them to other Native people.

More about the Pueblo Revolt

They went back to their old system of government. And to fight the English and Spanish settlers, the Cherokee started the Cherokee Nation.

In the 1700s, there was a lot more change in American government. On the Great Plains, people like the Ute, the Comanche, the Blackfoot, the Sioux and the Cree got horses from the Pueblo people.

They left their farms or their hunting and gathering and became horse-riding nomads, hunting bison. They started to form bigger and bigger groups, so they could fight the settlers better.

On the East Coast, English settlers decided to break free of the English king. They fought the Revolutionary War to set up their own country, the United States of America. They wrote the Declaration of Independence to explain why they were fighting. Then they wrote the Constitution to explain how their new republic would work. 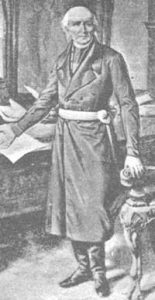 One main idea was that the President would be weaker than Congress. And both the President and Congress would be under the Constitution and balanced by the Supreme Court. So there wouldn’t be any one man with very much power.

Another important idea was that individual people – both men and women – had legal rights that could not be taken away by the government. Some of these ideas came from the government of ancient Rome. Rome also had a powerful Senate and less powerful consuls.

The United States and Native Americans

In 1821, the Mexicans threw out the governors of the Spanish king Ferdinand II. Instead they set up their own republic.

But by 1848, the United States took most of Mexico and made it part of the United States. Today’s states of California, Nevada, Colorado, Utah, Arizona, New Mexico, and Texas all used to be part of Mexico. And in 1867, Canada asked the governors of the English king to leave, and Canada also became a republic.