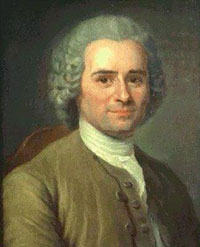 Rousseau was born in 1712 AD into a Protestant family living in Geneva, and his mother died of an infection she caught while he was being born. Like the earlier philosopher Astell, Jean-Jacques Rousseau’s family was not rich, and like her Rousseau didn’t get to go to school much. At 13 his uncle apprenticed him to be a sort of secretary. When he was 15, he ran away to have adventures – and met a woman who gave him an education. When Rousseau was 30, he moved to Paris and began to write philosophy.

Like Voltaire (who was a little older), Rousseau rejected organized religion. But while Voltaire (who was rich and educated) turned to scientific reasoning instead, Rousseau (who was poor and uneducated) wanted people to live according to their natural instincts. Most Christians thought that people were naturally born bad, and had to be taught to be good, but Rousseau thought that people were naturally born good ,though they still needed training. (Note the similarities with Astell, who was also from a poorer, less well educated family.)

Voltaire still thought kings should rule countries, but Rousseau saw government as a “social contract” among the people who lived in a place, where they all agreed to live by certain rules so they could get along better. Like the Greek philosopher Plato, and like Hobbes, Rousseau worried that people might make bad decisions. He thought maybe they needed wise men to write their constitutions for them. Like the Renaissance philosopher Machiavelli, Rousseau thought people might also need some religion to build community.

Like the ancient Athenians, Rousseau saw his social contract as a contract among men, and not women. Rousseau thought men should prevent women from getting a good education, and only let women keep house and take care of children. Rousseau himself had a lifetime partner, Therese Levasseur, who was a seamstress. They had five children, and Rousseau put all five, one after the other, into an orphanage, where they died. Children seemed to him like a burden.

Rousseau lived long enough to see the beginning of the American Revolutionary War in 1776. His ideas about the “social contract” are very important to the Declaration of Independence, and support for those ideas in France helped get France to help fight the Revolutionary War. But Rousseau died when he was 66, before the United States won the war, and he missed the French Revolution.

Bibliography and further reading about Rousseau: