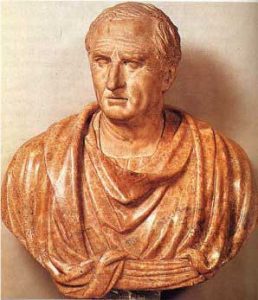 In the last years of the Roman Republic, great men like Julius Caesar and Pompey fought over which of them would rule Rome. Cicero was one of the last men to stand up for the old Republic.

The Roman Republic
Roman philosophy
All our Ancient Rome articles

He tried to keep the republican government going. While you might think it was good that Cicero stood up for voting and representative government, the government he supported was really controlled by rich men. He and the other rich men used their power to take money from poorer people.

What was Cicero’s philosophy?

As well as being one of the most powerful politicians in Rome, Cicero also wrote several books of philosophy. Cicero lived at the same time as Lucretius, soon after the Romans conquered Greece. Both of them read Greek philosophy and translated it into Latin for Roman readers. They added their own thoughts at the same time.

Who was Lucretius?
The Epicureans
The Stoics
More about Greek philosophy

While Lucretius followed the Epicurean philosophers, Cicero followed the Stoics. And Cicero added to Stoic ideas too. He was one of the first philosophers to suggest, in his “On Duties”, that people have a moral duty to get justice for all people – all humans – regardless of whether they were Roman or not, and no matter what else was going on. Cicero’s important idea was that all people have rights just because they are people.

In 75 BC, Cicero worked for a year representing the Roman Republic in Sicily. While he was there, he took a trip to visit the tomb of Archimedes in Syracuse, and had it cleaned up.

What happened to Cicero?

In the end, however, Cicero’s enemy Mark Anthony and Anthony’s ally Augustus succeeded in taking over. They had Cicero executed in 43 BC, only one year after the assassination of Julius Caesar. Cicero was 63 years old when they killed him. Unlike Lucretius, Cicero was declared to be okay by the Christian Church. So kids continued to read Cicero in school right through the Middle Ages.

Learn by doing: make a speech using some of Cicero’s techniques

Bibliography and further reading about Cicero: