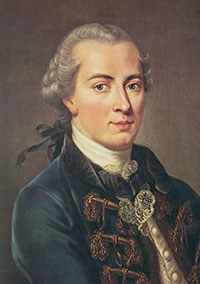 By the end of the 1700s AD, Germany was starting to be a more powerful country. France was busy with the Revolution, and the next important European philosopher after Rousseau came from Germany: Immanuel Kant.

The French Revolution
Who was Rousseau?
European philosophy
European Enlightenment Science
All our modern Europe articles

Kant started his work as an astronomer. He figured out that our solar system formed from a cloud of dust, and repeated al-Tusi‘s earlier finding that large nebulas were made of thousands of stars. But then he decided to turn away from astronomy and go into philosophy instead.

Who was al-Tusi?
Medieval Islamic astronomy
History of astronomy

Kant built on Descartes’ idea that we can only know what we ourselves think, and what our senses tell us. Hume wanted a firm line between imagination and fact. Kant pointed out that even when our senses report facts, we can only understand them by thinking about them. You need both the facts and the thinking to understand the world.

Who was Descartes?
Who was Hume?

Even though he wanted to use reason and rejected organized religion, Kant still allowed for the possibility that there was a God.

Did you find out what you wanted to know about Kant? Let us know in the comments!

Go on to Wollstonecraft
Austria-Hungary

Bibliography and further reading about Kant: