Nasir al Tusi was born in Iran in 1201 AD, as the Seljuk Empire was falling apart. The Seljuks were Turkic people. But al Tusi, like most of the people living near him, was of Iranian descent. He spoke Persian at home. He was from a Shiite, Sufi family. Al Tusi’s father died when he was young, but he told his son to study hard and be a scholar. Al Tusi travelled from town to town, studying with many teachers. Some of al Tusi’s teachers had been taught by men who had been taught by Ibn Sina, a hundred and fifty years earlier. Al Tusi admired Ibn Sina and wrote books defending Ibn Sina’s work.

When al Tusi grew up, he joined the court of the Ismaili rulers of his area. He continued to write science and philosophy books. Building on Arya Bhata‘s work in India, al Tusi developed new ideas about the math side of trigonometry. 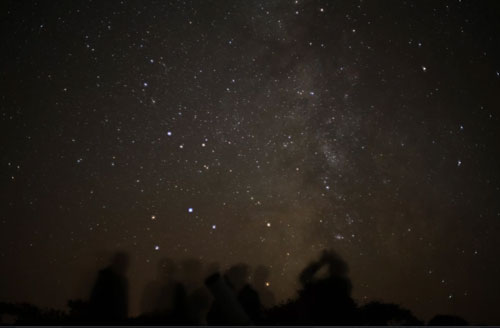 When al Tusi was 55 years old, in 1256 AD, the Mongols invaded Ismaili territory. Al Tusi ended up going over to the Mongol side. He soon convinced the Mongol ruler, Hulegu Khan (a grandson of Genghis Khan), to build him a big astronomical observatory in Azerbaijan. There he could study the question of whether the earth went around the sun.

Thanks to his observatory, al Tusi was able to establish very accurate records of how the planets and the sun moved in relation to the earth. And he was able to show some problems in Ptolemy’s ideas of how this worked. Al Tusi saw that the Milky Way was made of hundreds of thousands of stars. But he thought they must be very small, without realizing how far away they were. Without a working telescope, al Tusi couldn’t see that, and he also couldn’t see that the earth went around the sun.

Learn by doing: go somewhere dark where you can see the Milky Way
More about Islamic astronomy