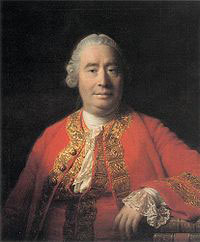 Who was David Hume?

Soon after Hobbes and Locke died, starting in 1739 AD, David Hume published more important books about philosophy. Hume disagreed with Descartes‘ idea that people did what their reason or logic told them was best.

Hume thought people were more likely to just do what they wanted, even if they knew it was wrong or would end badly. People, said Hume, would go ahead and eat junk food, or run off with their best friend’s boyfriend.

Like Hobbes, Hume thought people needed laws to keep them in line. Like Locke, he supported some natural rights: free speech, the separation of church and state, and letting any man who owned land vote for the government. But Hume disagreed with Locke’s idea that people had a duty to revolt. Hume thought revolutions were dangerous and that people should not revolt without a very good reason.

Hume’s father died when he was two years old. His Calvinist mother raised him and his brother and sister. Nobody knows now what happened to his sister, but Hume left for the University of Edinburgh in Scotland very young, at 10 or 12 (most people started college at 14 then). After college, when he was 23, he worked as a clerk in a business in England and saved up some money. Then he went to France and lived on his savings while he wrote his first philosophy book.

Hume tried to get hired as a university professor. But nobody would hire him because they thought he didn’t believe in God. He ended up being a librarian, and then a personal assistant, instead. While he was in Paris, he met Rousseau, but they argued. He was a good friend of the economist Adam Smith. Like Hobbes and Locke, Hume never married or had children.

Like Voltaire, Hume wanted people to draw a strict line between facts and imagination. People could know facts only if they had direct evidence through their own senses or possibly if they drew logical conclusions from that evidence. Sure, people could imagine other ideas, but those were just imagining and not facts. This rule eliminated most religious faith, and the idea of life after death, for Hume.

Hume also warns us not to assume that just because one thing happens after another, the first thing caused the second, or that two things that happen together have to be related. If you pray to God and then you get better from your sickness, that doesn’t prove that God made you better.

Evolution of eyes
Where do apples come from?

Hume followed this up by arguing that there was no evidence that God had designed the universe. He asked, if the universe needed God to design it, who designed God? Hume also suggested that complicated things that seem to have been designed, like human eyes or apples, might just be the result of surviving because they are useful – an early version of evolution.

Hume died of cancer in 1776, just as Americans were writing the Declaration of Independence. He was 65 years old.

Learn by doing: Hume and the Declaration of Independence
Go on to Voltaire

Bibliography and further reading about Hume: