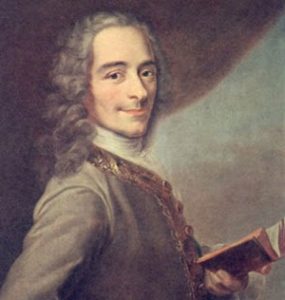 Voltaire took ideas about religion, science, and human rights that were just getting started in the 1700s AD, and encouraged new ways of thinking about them. His ideas paved the way for the American Revolutionary War and the French Revolution, though he died just before the French Revolution.

Voltaire was born François-Marie Arouet, to a rich family in France. His mother died when he was seven years old. Three years later, when he was ten, Arouet went to Jesuit schools (His older sister Marguerite had to stay home). His father pushed him to be a lawyer like himself (as with Hobbes and Descartes). But when Arouet was 17 he decided to become a writer. He used the pen name Voltaire. An argument with a more powerful family got Louis XV to send Voltaire to prison. Then the king sent him to exile in England for three years. While Voltaire was in England, angry because he was jailed unfairly, he studied Cromwell‘s reforms from a generation earlier and decided to work to limit the power of the kings in France.

While he was in England, Voltaire also read Shakespeare‘s plays and began to write plays like them in French. And, he learned about the work of Isaac Newton. With his girlfriend du Chatelet, who also was interested in Newton’s work, Voltaire began to do scientific experiments with light. (Like the other philosophers of his time, Voltaire never married or had children.) He became friends with, and influenced, younger philosophers like Rousseau and Benjamin Franklin. Rulers like Catherine the Great of Russia exchanged letters with Voltaire too.

Voltaire’s work against censorship and religion made the king and the church persecute him in France. To keep from going to prison again, Voltaire went to live in Prussia for a while. But there too the king persecuted him. Voltaire ended up moving back to France. But he stayed in the country with his niece, away from Paris and the king.

Like Hume, who lived at the same time, Voltaire believed that reason and logic would always work out better than religious faith (though Voltaire did believe in God). Voltaire’s devotion to reason and evidence helped him to see the contributions of women to society. He also appreciated the contributions that Islamic scientists had made to Europe and the achievements of Jewish, Chinese, Indian, Native American and African culture. He saw the benefits of smallpox inoculation, and how wrong colonialism and slavery were. Voltaire lived to be 83 years old, and all his life he worked to stop ignorance, injustice, and religious persecution wherever he found it.

More about du Chatelet
Go on to Rousseau

Bibliography and further reading about Voltaire: