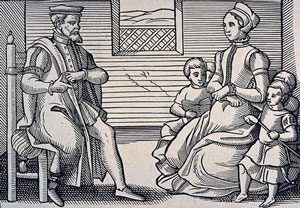 A Puritan family about 1563

About 1563 AD, some people in England decided that they wanted to follow a way of life that they thought would be more according to what the Christian God wanted. They called themselves “the godly”, but other people called them “Puritans.”

Puritan people, like Calvinists, thought only God decided whether you got into Heaven. But they thought people who were chosen to get into Heaven could show it by living quiet, simple lives, spending a lot of their time praying, reading the Bible (which had just been translated into English), and listening to sermons. Puritans wore plain clothes and lived in plain houses. They went to church a lot (all day on Sundays and often on other days too). They thought that God wanted them to work very hard and be very serious. Puritans did not have parties. They did not listen to music, or dance, or go to plays. They did not celebrate holidays, not even Christmas or Easter.

Like other people who had different religious ideas from their neighbors – for example the Quakers – the Puritans got into trouble in England. King Charles had some Puritans killed. So some of the Puritans decided to leave England and start a new town in North America. In 1630 AD, the first Puritans came to Massachusetts to start a colony there. They pushed Native people off their land, forcing them further west. 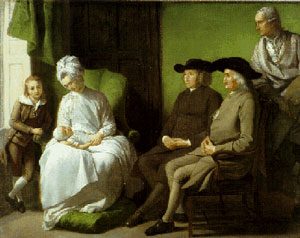 These Puritans were mostly richer and more educated than the Pilgrims who had come to North America on the Mayflower. They established schools and colleges, including Harvard College. The poet Anne Bradstreet, for example, was one of these educated Puritans. Today, we call the descendants of the Puritans Congregationalists or Presbyterians.