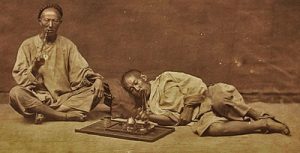 Walpole and the Opium Wars

In the late 1700s AD, the British prime minister Robert Walpole wanted to try to get more control of China. The British Empire was taking over India and Africa and Australia and they wanted China too.

Everyone in England wanted to buy lots of tea and silk and porcelain from China, but what could British traders sell to China? So the British were selling opium to China.

(More about the history of opium)

Selling opium was against the law in China, because drugs are bad for you. But the British traders and the British government didn’t care. More and more people in China got addicted to opium. They would get sick if they couldn’t get enough opium. But also, the opium would kill them. People were willing to kill and steal to get money for opium. Southern China got to be run by crime bosses. Life there was super violent and dangerous.

The Jiaqing Emperor tries to stop the British from selling drugs.

In 1810, the Jiaqing Emperor tried again to make the British generals stop selling opium in China and getting everyone addicted to it.

(Who was the Jiaqing Emperor?)

But he still only had a weak army, and he was far away in northern China. Nobody in southern China paid any attention to the Jiaqing Emperor’s laws. 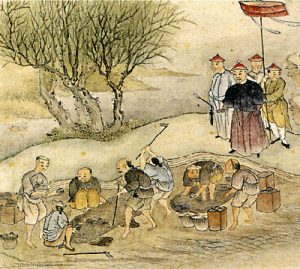 The navy shot cannons at Chinese port cities in the Opium Wars. The British guns and cannons were much better than Chinese weapons, and by 1842 Daoguang had to surrender. To end the war, China paid Britain a lot of money, and also agreed to let British traders use Chinese ports without being under Chinese laws. And they could keep right on selling opium.

The Xianfeng Emperor tries and loses one more time. 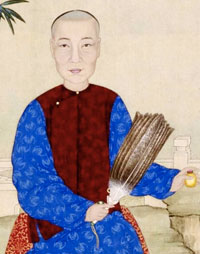 He also tried again to keep the British traders out of China, but after more fighting he had to surrender again in 1860. The Xianfeng Emperor paid more fines and had to allow more opium trading.

Bessemer steel and the China trade

The new Bessemer steel process allowed the British to sell steel much cheaper than Chinese smiths could make it.

The new British steel was also higher quality than Chinese steel. It put Chinese ironworkers out of business. The Xianfeng Emperor, depressed by his defeat, died the next year, in 1861. He was only 30 years old, and his only son was only five years old.

More about the British selling opium in China, from the Britannica

The early Qing Dynasty
What came next: the Empress Cixi