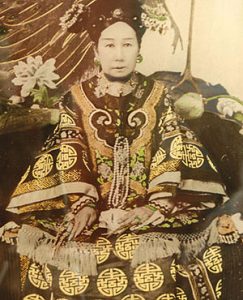 When the Xianfeng Emperor of the Qing Dynasty in China died in 1861 AD, his only son was only five years old. People called him the Tongzhi Emperor, but Tongzhi’s mother, the Empress Cixi, who was 27 years old, was really the ruler.

Just as with the Mughals in India and with the Russians a little earlier, and with the Ottomans and Iran about the same time, Empress Cixi now saw that China needed to catch up to Europe in math, science, and technology – especially in steel and rubber. China had lost the Opium Wars because the British had better ships and guns.

The Opium Wars
History of steel
Where does rubber come from?

But it wasn’t so easy to catch up. Cixi brought in European teachers and started special schools, and sent Chinese boys to schools in the United States, but she (and many other people) were nervous about making too many changes too fast. What if it didn’t work out?

What if new European ideas brought democracy to China, as they had in Europe and the United States? Would the people kill Empress Cixi herself? Cixi bought British warships, but she was afraid to build the railways that China needed, and China didn’t know how to make the Bessemer steel that you needed to make the steel rails.

Rebellions in South and West China

So when Cixi needed to fight off a huge rebellion in southern China, where people wanted to be free of the Manchu Qing Dynasty and redistribute the wealth, she didn’t have the modern army to do it, and in 1864 she had to get help from the British army in order to stop the revolt. Then the Uighurs, in Western China tried to break free of China and form their own country. Again in 1876 Cixi had to call in help from Britain  in order to win.

The Uighurs
What did the rebellion want?
Inequality in Europe

Cixi regent for her nephew

When Tongzhi died of smallpox at 18, in 1874, Empress Cixi kept power, ruling in the name of her nephew, the Guangxu Emperor, who was also a child.

China, the French, and Vietnam

And then in 1895 China lost another war with Japan, and many of the fancy new warships were destroyed. In 1898, when Guangxu grew up, he tried to get power and change things to make China a more democratic and modern country. But again Empress Cixi was 64 years old now. She was afraid of losing power, and maybe too old to make big changes. She stopped the changes.

When did Empress Cixi die?

Empress Cixi died in 1908, after ruling China for 47 years. The day before she died, she seems to have poisoned her nephew, the Guangxu Emperor, with arsenic. Four years later, democracy and modernization came to China anyway, as a people’s revolution overthrew the Qing Dynasty.

More about the Qing Dynasty
The Chinese Republic
More about China