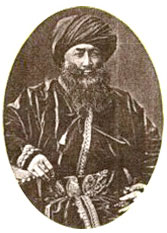 After the collapse of the Mongol Empire about 1600 AD, the Uighurs regained their independence.

Earlier Uighurs
Who were the Mongols?
All our Central Asia articles

The Uighurs convert to Islam

The Uighurs kept on living in the eastern part of Central Asia. (That is now Western China.) By this time, the Uighurs had mostly converted from Christianity to Sunni Islam.

Sunni and Shiite
More about Islam

The collapse of trade along the Silk Road around this same time, though, made everybody who had lived from Silk Road trade much poorer than they had been before, and the Uighurs were no exception. They settled down and used irrigation to grow wheat and melons and cotton.

The story of the Silk Road
Where did wheat come from?
Why were the Uighurs growing cotton?

In 1759 AD, the Qianlong Emperor expanded China to conquer the Uighur land to China’s west. Ahmad Shah Durrani, the ruler of the newly independent country of Afghanistan, tried to force Qianlong to leave the Uighurs alone, but he didn’t have enough money or soldiers.

Who was the Qianlong Emperor?
More about Ahmad Shah Durrani

Ahmad Shah stopped trade with China and sent messengers to Qianlong, but Qianlong was determined to keep control of the Tarim Basin.

The role of the cotton gin

The invention of the cotton gin had made the Uighurs’ cotton much more profitable. Like the slaveholders of the United States, China wanted to make money forcing Uighurs to grow cotton.

The Uighurs fight for their freedom

Again in 1864 – during the American Civil War – the Uighurs tried to get free of the Qing Dynasty, just like the enslaved African-Americans were trying to get free in the United States.

Who was Empress Cixi?
More about the Ottoman Empire
Russia and the Crimean War

But in 1876, Queen Victoria of Britain began to be afraid that Russia would get too much power if the Uighurs became part of Russia. She gave Empress Cixi money to bring a big army to counter-attack and take back control of the Uighur people.

When the Qing Dynasty ended in 1912, and the Republic of China began, the Uighurs began to think again about getting their independence. In 1933, they had another rebellion, helped out by the Russian leader Stalin. In 1944, they tried again – again with Stalin’s help. But the Uighurs lost to the Chinese army both times.

More about Stalin
More about the Republic of China

Today, there are about 9 million Uighurs living in China, but they are divided on how they feel about it. Some Uighurs want to be Chinese; others would rather be Russian. Some want to have their own independent country again. Some feel more part of Islam, others feel more part of the Turkic world. Because there are huge amounts of oil and gas under the ground in the Tarim Basin, where the Uighurs live, China’s not likely to let them get independent anytime soon.

Did you find out what you wanted to know about Uighur history? Let us know in the comments!

or check out this article in the Encyclopedia Britannica