Ottoman Empire in the 1700s 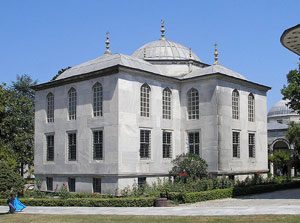 By 1703 AD, people were unhappy enough with Feyzullah Efendi that the Sultan killed him.

The Sultan’s mother, Rabia Gulnus, took charge of the government. Rabia’s main worry was Peter the Great‘s strength in Russia, just north of the Ottoman Empire.

What’s Peter the Great been up to?

In 1710, Rabia had her son declare war on Russia. She took back some of southern Ukraine (modern Moldova and Romania) from Russia. But soon Rabia was distracted by eastern attacks of the last Safavid. She abandoned the war with Russia.

Trouble for the Safavids in Iran

Rabia died in 1715, and by 1718 the Grand Vizier, Damat Ibrahim Pasha, had retaken control of the Ottoman Empire. Damat Ibrahim Pasha took part of Iraq from the Safavids, encouraged manufacturing and trade and European-style architecture, and left the Ottoman Empire with plenty of money. But the changes he made to make the army more efficient made the soldiers angry. In 1730, the soldiers revolted: Ibrahim was killed, and Ahmed retired.

In 1730, Nader Shah attacked the Ottomans and took back much of the land that the last Safavids had lost. Under Czarina Anna, the Russians took more land from the Ottoman Empire.

The Mughal Empire in India

In 1789, Mihrisah Valide Sultan took over power as regent for her son, Selim III. Like the other Ottoman rulers of the 1700s, Mihrisah wanted to modernize the Ottoman Empire, especially by reorganizing the army and by opening more schools. But the British and the French controlled ocean trade with their navies. Without much trade, the Ottoman Empire just didn’t have enough money.

Mihrisah couldn’t really afford to modernize her empire. While in the early days, the Ottomans themselves had been leaders in new military tactics, especially the use of gunpowder and light cannon, by the 1700s the European countries had new military ideas that the Ottomans could not imitate.

Europe is rich and the Ottomans are poor

In addition, the Europeans were producing tools, housewares, and clothing cheaper than the Ottomans could make them themselves. This was partly from investing the money from trade in building new modern factories in Europe –  the Industrial Revolution – but it was mostly from using cheap slave labor in the Americas and practically slave labor in Africa and India. Again, the Ottomans couldn’t afford to buy or capture all those slaves, or to industrialize their factories.

What was the Industrial Revolution?
African-American slavery
The British in India

The end of the Ottoman Empire

By the late 1700s, the new tactics and weapons of the European armies allowed them to take more and more land from the Ottoman Empire, so the empire slowly got smaller and smaller, and poorer and poorer. Even with help from Britain and France during the Crimean War in the 1850s, the Ottomans gradually lost Eastern Europe and the Black Sea to Russia during the 1870s.

What was the Crimean War?

The Ottoman Empire lost Egypt to the British in 1882, and North Africa to France. Finally in 1922, after the end of World War I, the Ottoman Empire collapsed entirely, and the last Sultan, Mehmed VI, handed over power to the new Republic of Turkey. There are still people alive today who were born in the Ottoman Empire.