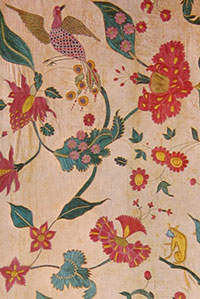 In the early 1600s AD, traders began to bring cotton cloth to Europe on sailing ships from India. People thought this cotton cloth was very convenient – it was pretty, with patterns of flowers on it, and it was easier to wash than linen or wool, and cooler in the summer.

With the Industrial Revolution of the late 1700s, people in England invented machines powered by coal and steam that could spin and knit wool and cotton. Machine-made clothing from factories was much cheaper and better than home-made, and soon most people were wearing machine-made clothing. 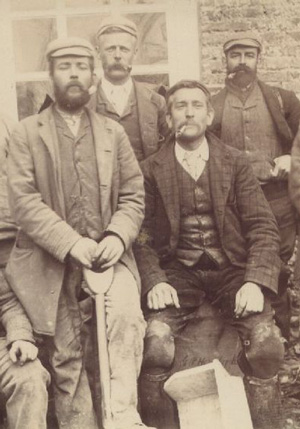 People started to own more than one outfit, and they began to wear more and more layers: underwear, shirts, vests, jackets and coats for men; underwear, shifts, petticoats, dresses, aprons, and capes for women. To make so much cheap clothing, the English factories needed lots of cotton. At first they got their cotton from the American south. To produce enough cotton, Eli Whitney invented the cotton gin, so you could get the seeds out quickly. But to plant and harvest that much cotton, thousands of slaves had to do extremely hard work every day, and many died.

When the Civil War made it hard for the British to get American cotton, in the 1860s, the British government used its military power in India to force businesses in India to stop making cloth and just sell them the raw cotton. The English took the cotton on ships to England, used their new factories to make the cotton into cloth, and then they shipped it back to India to sell there for clothes. Now India had to sell cotton cheap, and then buy cloth, instead of making their own cloth and selling it at a good price. India became much poorer, and England became much richer.

Learn by doing: how much of your clothing is cotton?
Modern clothing
More about Slavery and Cotton

Bibliography and further reading about European clothing, you might want to buy these books, or get them at your local library: