At the very end of the 1700s AD, the invention of the cotton gin meant that the new country of the United States of America could produce tons of cotton very cheaply – if they forced people to work as slaves so the work was very cheap. European traders stopped getting their cotton from India and began to buy it from the United States instead. If you used the new spinning and weaving machines to turn this cotton into cloth, you got cloth much cheaper than anyone had ever had before. Instead of being scarce and valuable, in the 1800s clothes became cheap and everybody had much more clothing than before. Men began to wear pants down to their knees (what we’d call shorts), and to tuck their shirts into their pants. But most people still couldn’t afford shoes.

Ordinary farming men and women who before had only had one linen tunic to wear, and maybe a wool cloak, now could have undershirts, dresses, and even petticoats and underwear. Men began to wear undershirts under their shirts and underpants under their pants. People even slowly began to change their clothes, and by 1900 AD many people changed their clothes every few days, or even every day. In warm places, people wore mostly cotton. In colder places, they wore wool jackets, dresses, coats and scarves over their cotton clothes. 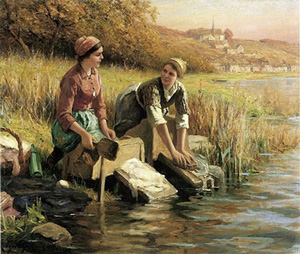 Rich people, who wanted to look different from poor people, began to wear fancier and fancier clothing. Rich women wore several petticoats at a time, and sewed lace and ruffles everywhere. People changed their clothes several times every day, wearing different outfits for breakfast, lunch, and dinner. They had special clothes for riding horses and for swimming.

All this clothing meant a lot more laundry to do. You had to do laundry by hand, and it was heavy work. Rich people hired poorer woman and teenagers to do their laundry. Most women had to do their family’s laundry on top of their farm work – but, on the other hand, they didn’t have to spin anymore.

Learn by doing: do the laundry at your house
European Clothing in the 1900s