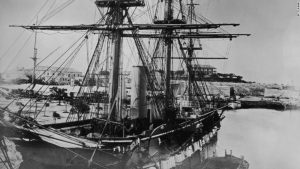 A British merchant ship in the Caribbean, in the 1860s

By 1800 AD, France, Britain, and Spain were all getting rich. They used their strong armies and navies to take wood, food, and cotton from other countries without paying for them. France was taking things from West Africa and Haiti. Britain was taking stuff from India, Canada, Australia, New Zealand and South Africa. And they bought the cotton grown by enslaved African-Americans in the United States. Spain was taking sugar, cotton, coffee, and silver from South America.

Taking all this stuff meant that people in France and Britain didn’t have to spend all their time farming to get enough food to eat. Instead, more children could go to school. More people could spend time inventing things. Among the first things Europeans invented were ways to get more food faster. They built machines that could plow, reap, and thresh wheat and oats. They invented fertilizers to make the same land grow more food. And they built steam engines that could help people plow and reap and thresh. Inventors worked on canals and trains to carry food from one place to another. They built a telegraph and telephone so that people would know right away where to bring the food.

As people in northern Europe got richer, they could afford to buy things that weren’t food – clothes, furniture, books, and toys. Cheap cotton and spinning, knitting, and weaving machines made clothes cheaper. Europeans started to own several dresses, not just one. By the 1850s, Britain started to make a lot of high-quality Bessemer steel. First the steel was for railroad rails. Soon factories made steel into forks and knives, cans and can-openers, screws and screwdrivers, and much more. But those factories needed power. More and more people had to work in coal mines across northern Europe, digging up coal to run the machines.

Who would work in these factories and mines? Most adults were busy farming, so in the early 1800s mainly children and teenaged girls worked in the factories. People tried to pass laws preventing kids from working, but they were needed so the laws mostly didn’t work. Gradually, as machines began to do a lot of the farming, even adults began to work in factories. In factories, adults worked harder for less pay than they had on the farms, and often got sick. By the 1830s, workers began to form unions and fight together for better working conditions. British coal miners fought hard and won better pay and better safety rules. 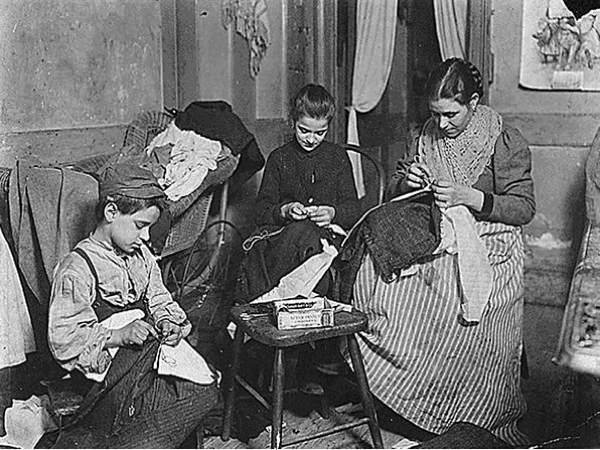 One way to avoid the laws keeping kids out of factories, and to make it harder for people to form unions, was to let people work from home. In the late 1800s many women and kids worked in their own houses. They sewed clothes or made tools or toys for big companies to sell. They got paid a few pennies for each thing they made, so they had to work very long days to make enough to live on.

Learn by doing: go see tractors and reapers working on a farm
More about coal
More about steel
And more about glass
European economy in the 1900s