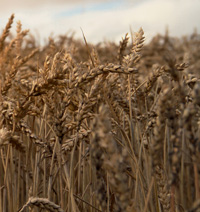 A field of rye growing

Like barley and wheat, rye’s a kind of grass that is a good source of carbohydrates for people. Rye is different from the other grains mainly in that it will grow much further north, in colder climates, and in poorer soils. So people who lived further north, in Russia and Poland and northern Germany, ate a lot of rye bread. Rye bread is more chewy than wheat or barley bread, and has a stronger taste.

People probably first ate rye bread by gathering wild rye, which grew around the Black Sea and between the Black Sea and the Caspian Sea, in the homeland of the Indo-Europeans. Because rye came from Central Asia, people often ate it with other Central Asian flavorings like coriander or anise, but especially with caraway seeds. People were farming rye by around 7000 BC, in the Stone Age, but because the Indo-Europeans were mostly cattle herders rather than farmers, they didn’t farm rye that much at first. Pliny the Elder said people would only eat rye if they were starving.

But rye became a lot more common in Late Antiquity, when people started to do more farming in the Ukraine, Russia, Hungary, Poland, Austria, and Germany. These places are too cold for wheat and barley to grow well, and rye does better. You can plant it in the late fall, and it will live under the snow and grow tall in the spring, so you harvest rye in late June.

Only a little later, around 500 AD, the Saxons brought their rye seeds to Britain, and the Franks brought rye to France. The Vikings brought rye as far west as Iceland and Greenland. People in northern France and England began for the first time to eat a lot of rye bread. They didn’t think much of it – they called rye bread “black bread” and complained about having to eat it instead of “white bread” made from refined wheat flour. Rich people ate wheat bread. But poor people all across northern Europe ate rye bread, because it was cheaper than wheat bread, and you could keep it a long time – for months – before it got moldy.

When the Little Ice Age hit Europe about 1300 AD, it got colder and wetter, and people began to eat more and more rye bread – “black bread” – even though they still hated it. But as Europeans got richer from colonizing other countries, even poor people began to insist on eating wheat bread. In England, most people switched to wheat bread in the 1600s, along with the revolution of Oliver Cromwell. In France, the French Revolution in the late 1700s brought people a new sense of their equality – which they expressed by demanding wheat bread.

Further east, people ate rye bread longer, but by the late 1800s they, too, were beginning to demand wheat bread, as we see in Heidi, written in 1881. In North America, both Natives and European settlers (many of them from Germany) were eating black bread made by mixing rye and cornmeal, but they didn’t like it much, and by 1900 they were eating wheat bread too. But in Russia and in Scandinavia, people still eat a lot of rye bread even today.

Learn by doing – eat some rye bread
What about wheat?