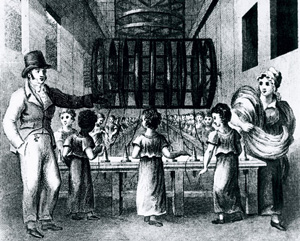 During the 1700s AD, the first modern factories opened. At first these were spinning factories to make thread for clothing, blankets, and sheets. Because most adults were busy working on farms, factory owners hired mostly children to work in the spinning factories. In Britain in 1788, two out of three workers in cotton mills were children. Factory owners started out using mainly water wheels for power, but soon they started to use coal instead. Coal was dirtier, but it let owners move the factories away from rivers and into cities, where the army and the police could help them control the workers. By the 1770s, coal mines opened up in France, Belgium, Germany, and Poland, as well as Britain.

As the factories began to use more coal, rich people opened more and deeper coal mines, and they hired more and more children to work in coal mines. Kids could fit into smaller tunnels than adults, but they got sick and died from working in the mines. In Scotland, coal workers were bound to their “masters” in a kind of slavery.

The invention of accurate clocks in the 1700s, although it was first useful for figuring out the location of ships, turned out also to be useful for hiring hourly work. Traditionally landowners had paid workers by the day, but now factory bosses began to pay by the hour, and dock (take back) some of your pay if you were even a minute or two late, or if you spent too much time in the bathroom or eating lunch. Workers had to work a lot harder than they were used to for the same pay. 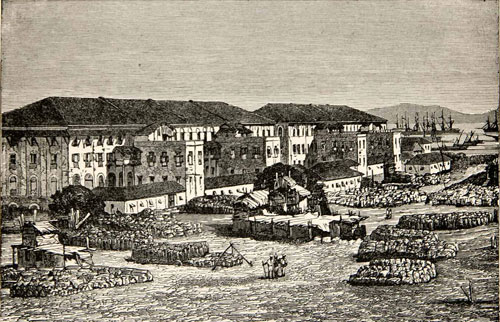 In addition to making British workers work much harder than they were used to, rich people in Britain in the 1700s were making money by making people in many other countries also work hard, while the rich British people kept the profits. In North America, enslaved African-American people worked to grow tobacco and rice. And in India, Indian people got poorer and poorer, growing cotton for British spinning mills. In the Caribbean, enslaved African-Americans grew sugar for British profiteers. And now in Australia, deported British criminals raised sheep on huge ranches to send back wool to British mills. All over the world – even in Britain itself – people worked hard all day, but only a few rich people lived better because of it.

Meanwhile in the rest of Europe, the same thing was happening, but more slowly. French leaders were also getting richer by exploiting Africans, and they were beginning to build factories. Germany and Italy had fewer factories and fewer colonies, and therefore also fewer rich people.

Learn by doing: talk to someone who works for an hourly wage, or in a factory
More about the European Economy (1800s)