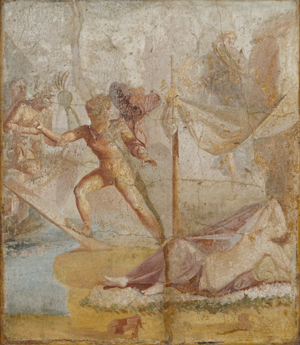 Different Greek stories give different reasons why he did this: maybe he just didn’t like Ariadne very much, or maybe he thought the Athenians wouldn’t like her because she was Cretan. Or maybe he was afraid King Minos would be angry. Some stories say it was because Dionysos fell in love with her. But all the stories agree that he left her there on the island.

When Theseus got as far as Sounion, he was close enough for the ship to be seen from Athens. But he had forgotten to change the sail from black to white! His father, King Aegeus, was looking out for Theseus’ ship. When he saw the black sail he thought Theseus was dead, and he was so sad that he jumped off the cliff and killed himself.

When Theseus reached Athens, he was very sorry to hear that his father was dead, and it was his own fault. But then he became king, and he was a very good king who ruled for a long time.

Learn by doing: visit an island or sail a toy boat
More about Theseus (Phaedra)

Bibliography and further reading about Theseus:

Theseus and Athens, by Henry J. Walker (1995). An analysis of the Theseus myth in Athens by a specialist, for specialists.