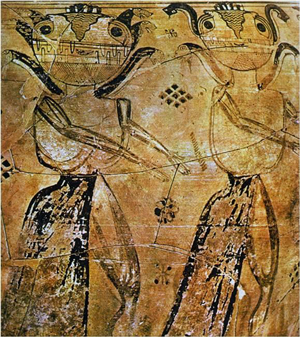 Medusa’s sisters, from an Athenian Proto-Geometric vase about 675-650 BC

So Perseus took the winged sandals and the sword and the shield and he said thank you and he flew to where Medusa‘s cave was. She lived there with her two sisters who were ugly too like her. When Perseus got there all three sisters were asleep. Perseus remembered not to look at them and he looked in the shiny shield and cut off their heads – all three of them! Then Perseus took Medusa’s head and put it in a bag and flew away.

(In some versions of the story, the winged horse Pegasus flew out of Medusa’s neck when Perseus cut off her head.)

Here’s a claymation video of Perseus and Medusa 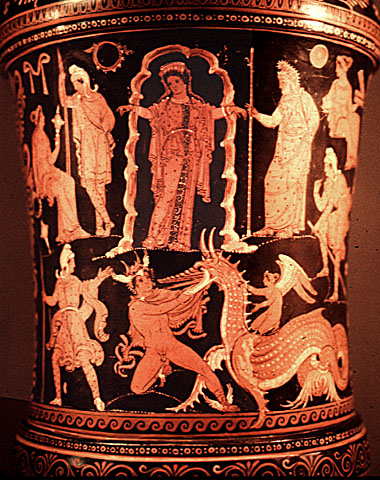 Perseus and Andromeda, from southern Italy. Red figure vase, about 350 BC, now in Getty Museum

As Perseus was flying home he heard somebody screaming and crying so he flew down lower to see. It was a woman who was tied to a big rock on the edge of the ocean! Perseus saw that she was screaming because a huge sea monster snaky thing was about to eat her up. So he flew down to the rock and just as the monster was about to get them he pulled Medusa’s head out of the bag and showed it to the monster and the monster turned into stone, just like that!

So Perseus untied the woman. She said her name was Andromeda, and her father, who was king there, had tied her up there so the monster would take her and leave the rest of the family alone. So Perseus took Andromeda with him back to his home. 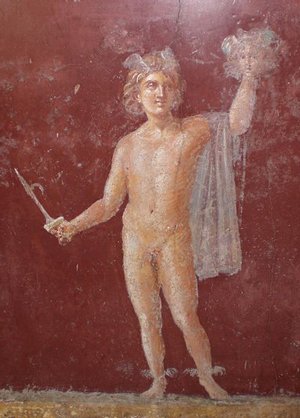 When Perseus finally did get home, he found that the bad king was still trying to get Danaeto marry him. Perseus was angry about that, so he went right into the palace. The bad king asked Perseus why he had come back? And Perseus said because he had killed Medusa. The king laughed and said he didn’t believe it, so Perseus showed him Medusa’s head – and the king turned to stone too! So Perseus became the king, and he married Andromeda, and they all lived happily ever after.

Learn by doing: compare the Gorgons to Humbaba, or Kali
Another snake story: Hercules and the Hydra

Bibliography and further reading about Perseus:

Say Cheese, Medusa! Myth-O-Mania, by Kate McMullan (2002). A “cool” retelling of the story, with a lot of puns. More sympathetic to Medusa than to Perseus.