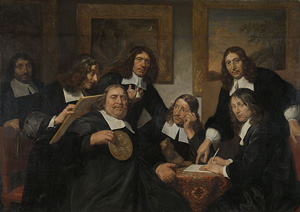 In the Renaissance, as cities grew all over Europe and more people began to buy things in stores instead of making them at home, many cities and towns developed a system of guilds that controlled who could make things and how.

What is the Renaissance?
History of silver
Letters of credit
All our Modern Europe articles

The guild system breaks down

In France and England and Switzerland, this guild system began to break down in the 1600s. Women forced their way into the guilds, and more and more businesses began to operate outside the guild system.

But in Germany, the guilds remained strong. The guilds wouldn’t let women work in manufacturing, and continued to keep up many other rules as well. This made the guild members richer, but it wasn’t good for the German economy generally. France, England, the Netherlands and Switzerland, with more freedom and less regulation, became richer than Germany.

Colonization and the economy 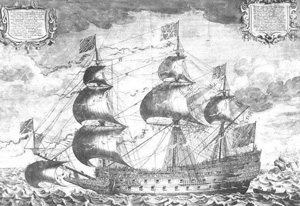 At the same time, France and England began to get richer by exploiting people in other parts of the world. European traders captured and brought home wealth that had previously belonged to people in the Americas, Africa, India, and South Asia.

British colonists took big trees from North America and sold them to traders to build wooden ships. In these ships, British traders sailed to India and bought cotton cloth, glass beads, and steel knives. From India they sailed to Africa and traded the cloth and beads and knives for enslaved people.

Traders brought the slaves on those same wooden ships to the Caribbean islands to grow sugar, and they sold the sugar in Europe. People in India, Africa, and the Americas got poorer, while a few rich Europeans got richer. Still, most Europeans spent their whole lives farming their land, and they were still poor.

Sugar and slavery
History of the Caribbean
Brazil and colonization

In 1602 and 1604, Dutch traders auctioned lots of fine porcelain dishes and cups from two captured Portuguese ships. Rich people went nuts for it.  Everybody wanted to eat off porcelain all of a sudden, or at least to have a beautiful vase to put on their table. European traders brought back lots of it from China. People started to drink lots of Chinese tea, too.

Cities and trade in Europe

Meanwhile, Eurasia was getting more urbanized and monetized. Prices rose as manufacturers and farmers raced to keep up with a growing population buying more and more things. Inventors tried to come up with faster ways to make things. They invented better spinning wheels and knitting machines, and better printing presses for books. They used water wheels for power more and more.

But then in 1644, the Manchu invaded China from the north and started the Qing Dynasty. With the war going on, China didn’t export any porcelain for a while. Europeans were upset about it. Some of them bought Japanese porcelain instead, but it wasn’t the same. Anne of Austria and her finance minister, Colbert, decided that it was a bad idea to depend on other countries for stuff. They started to make things in France instead: tapestries at Beauvais and the Gobelins, glass, iron tools, and wool cloth.

But most people in France still got their food by farming, and farming was difficult all through the 1600s because of the Little Ice Age. In the Early modern economy, many people worked hard and went hungry, so even with colonization people weren’t doing so well.

Did you find out what you wanted to know about the Early Modern economy in Europe? Let us know in the comments!

Learn by doing: string some Indian beads from a bead store
More about the European economy in the 1700s

More about the European economy in the 1700s
Modern Europe
Quatr.us home