Henry VIII of England – The Tudors 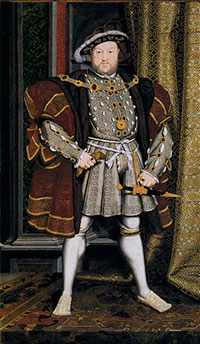 When Henry VII died in 1509, his son Henry VIII became king of England. He was only 18 years old, but he grabbed his power and ran with it. Like the Ottoman sultans, like Francis I in France, and like Charles Quint in the rest of Europe at the same time, Henry VIII worked to make his country more of a country and himself more of an absolute king.

The Church of England

One way Henry VIII got more power was that he started his own Christian church. Henry said he wouldn’t do what the Pope said anymore, even if the Pope excommunicated him. (Henry also got a lot of money by closing many Catholic monasteries and taking their money!). Once he had a lot of power, Henry killed a lot of people, including two of his seven wives.

Who is the Pope?
What is excommunication?
Medieval monks and monasteries

While Henry was alive, Spanish and Portuguese ships run by Charles V, the Holy Roman Emperor, were sailing all over the world and starting colonies. But in Henry’s time England’s main business was exporting wool cloth. Nobody in England was very interested in ships or sailing to the New World – yet.

When Henry died, probably of diabetes, in 1547, he was only 55 years old. Henry’s son Edward VI became king of England. But Edward was only nine years old, so his uncle Edward Seymour was the real ruler of England. This child Edward is the Edward of Mark Twain’s Prince and the Pauper story.

When young Edward died (possibly of tuberculosis or pneumonia) at 15, his older half-sister Mary soon became Queen of England.

Learn by doing: The Prince and the Pauper
What happened next? Queen Mary and Queen Elizabeth

Bibliography and further reading about Henry VIII and Tudor England:

What happened next? Queen Mary and Queen Elizabeth