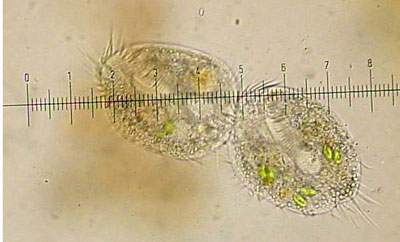 A cell dividing into two cells

One of the main ways we define whether something is alive is whether it can reproduce – if it can make a new version of itself. The first things we know about that could reproduce were molecules of RNA, more than four billion years ago.

What is RNA?
More about molecules
How did the first cells form?
All our biology articles

Really, it’s not so much that they *could* reproduce as that they *did* reproduce – the RNA molecules didn’t choose anything or decide anything. They just hung out in the water, and atoms that happened to drift up to them attached themselves automatically. This formed the same pattern as the original RNA molecule. Then if the doubled RNA molecule broke in half, there were two RNA molecules. It all happened by chance.

RNA could reproduce, but often the copies were messed up and didn’t work right. Mistakes happened during the copying. After a while some RNA molecules developed into DNA molecules, which looked like a ladder, so they had two identical sides that could check each other’s work and make sure that the copy didn’t have mistakes in it. (So a DNA molecule is basically an RNA molecule that didn’t split apart all the way after reproducing.) This didn’t always work, but it worked often enough to be a big advantage in reproduction.

More about DNA
A project with RNA and DNA

By about 3.5 billion years ago, some DNA molecules were living inside lipid membranes, forming the first simple cells. When this DNA reproduced itself, the new DNA molecule took some of the lipid membrane with it, to make a new cell.

What is a lipid membrane?
What’s a prokaryote cell?

The cell would pull the membrane together in the middle, with one DNA molecule attached to the membrane on each side, and then pinch it off to make two new cells. Many prokaryote cells – which is most cells in the world – still reproduce just like that

What is a vacuole?
Endoplasmic reticulum?
More about eukaryote cells

It’s more complicated for a eukaryote cell to reproduce because it has to also reproduce all of these specialized parts (organelles) inside it. Also, in order to make all these specialized parts, eukaryotes need a lot more instructions. They need more than one molecule of DNA inside their nucleus. Eukaryotes have to make sure that all of their DNA gets reproduced and split up correctly.

Eukaryote cells like yeast usually divided through a process called mitosis, where the DNA of the cell reproduces itself and then lines up in the middle of the cell to systematically split down the middle. But by around 1.4 billion years ago, most single-celled eukaryotes could also reproduce in a more complicated way called meiosis.

More about mitosis
And about meiosis
The first multi-cell creatures

How does meiosis work?

During meiosis, two cells each split into two smaller cells, but each with only half as much DNA as they needed. Then two of the new smaller cells combined together again. They made a new cell with half its DNA from one parent and half from the other parent. This method let the cells mix and match DNA to make lots of slightly different cells, so that as conditions changed at least some of them would have a better chance of surviving. Meiosis greatly sped up the process of evolution. By about 600 million years ago the first creatures with more than one cell formed.