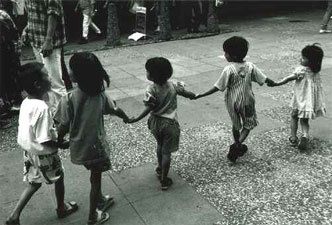 Building a model of DNA: a DNA project

To see how DNA unzips and zips up again, get a bunch of kids together, and two pieces of rope like long jump ropes. Start with five of the kids holding on to one jump rope – two with red shirts and three with blue, or any other way of dividing them.

What is DNA?
What is RNA?
RNA Lego project
Evolution of the first cells
All our biology articles

These kids are an RNA strand and they are going to try to reproduce themselves. All the rest of the kids just stand around near them.

Now the RNA strand – the five kids holding the rope – begins to run through the other kids, trying to catch a kid. When they catch a red shirt, he holds hands with another red shirt, and when they catch a blue shirt, she holds hands with one of the blue shirts. When they have all five spots filled, the new kids hold on to the other jump rope with their free hands, and now the ten kids together are a strand of DNA – one DNA molecule (except that real DNA molecules have four different kinds of stairs, not just two, and they are thousands of stairs long, not just five).

Now this DNA strand needs to make more DNA. It has to unfasten (stop holding hands), and each of the two strands now tries to catch more kids to build a new strand. When all (or almost all) of the kids are in strands, the game is over.

Did you try this DNA project on your playground? How did this work for you? Let us know in the comments!

Find out more about DNA
From DNA and proteins to cells

Bibliography and further reading about DNA: