Who were the Trojans? – West Asian history 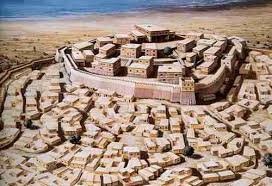 For thousands of years, people read Homer‘s Iliad and learned the story of the Trojan War. But nobody knew if it had really happened, or if there really even was a city of Troy. In the 1800s, a German man named Heinrich Schliemann decided to look for the city of Troy using archaeology, and he found it (or a lot of people think he found it) in northern Turkey, near modern Hissarlik.

The real city of Troy seems to have first started around 3000 BC. The first people who lived at Troy just had a small village, which archaeologists call Troy I. There was a fort where the chief and his family lived, and everybody else lived outside the fort in little mudbrick houses. A big fire destroyed this village about 2500 BC.

People rebuilt new villages on top of that first one, over and over, through the centuries. Sometime in the 2000s BC, Indo-Europeans moved from further east to Troy, speaking a language not too much different from Greek. Under their rule, in the Bronze Age, Troy was a big, rich city, controlling all the trade from the Mediterranean into the Black Sea and probably charging tolls, as Rome and Paris did about the same time.

But about 1900 BC, the same serious drought that ended Egypt’s Old Kingdom sent a second wave of Indo-Europeans – the Hittites – into what is now Turkey, pushing a lot of refugees into the area around Troy – some of them crossed the Aegean into Bulgaria and Greece, too. Many of these people settled in Troy, but Troy went on being a big, rich city throughout the Bronze Age, trading with the Hittites to their east, the Scythians to their north, and the Mycenaean Greeks to their west. 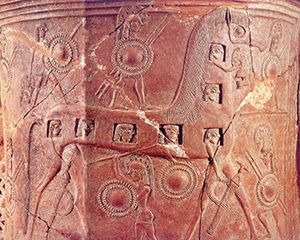 Earliest picture of the Trojan Horse, on a vase ca. 670 BC

About 1250 BC, a serious earthquake knocked down most of the buildings at Troy, but the people just rebuilt their city again. They took advantage of the opportunity to lay out wider, straighter streets than before. But then the city was again destroyed, apparently by a war and then a big fire, in the 1100s BC. That’s the event people think corresponds to Greek stories about the Trojan War. But in any case many Mediterranean cities collapsed about this time.

There seems to have been a second big drought that caused the end of the Bronze Age: the Hittites, the Egyptian New Kingdom, and the Mycenaeans all collapsed about this time too.

More about the Trojan War
The Iliad

More about the Trojan War
The Iliad
More about West Asia
Quatr.us home