Who was Alcibiades? Classical Greece

Alcibiades was born in Athens around 450 BC. His mother was an Alcmaeonid. He was from one of the richest families in Athens, and he grew up with the best of everything. After his father was killed in battle, Pericles, another Alcmaeonid, was Alcibiades’ guardian. When Alcibiades was a teenager, during the early years of the Peloponnesian War, Socrates was Alcibiades’ teacher.

The Curse of the Alcmaeonids
Socrates, the Greek philosopher
Classical Athens
All our Ancient Greece articles

Alcibiades and the Sicilian Expedition

By the time Alcibiades grew up, Athens was beginning to lose the Peloponnesian War. Alcibiades became a very good general. The Sicilian Expedition was his idea.

More about the Peloponnesian War
What’s the Sicilian Expedition?

The mutilation of the herms

But just before the army was about to leave for the Sicilian Expedition, somebody smashed a lot of good-luck statues in Athens, and people said it was Alcibiades and his friends. When the Athenians tried to arrest him, Alcibiades ended up running away to Athens’ enemy Sparta in the middle of the night. 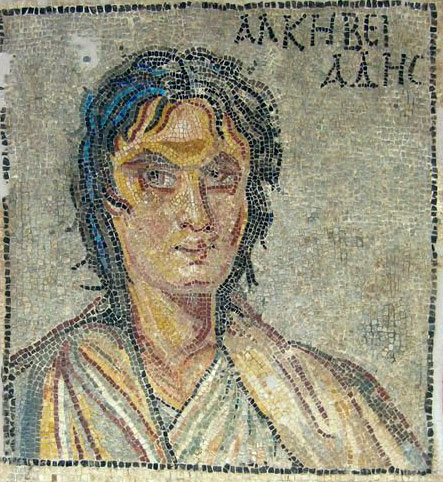 Roman mosaic of Alcibiades from Sparta

When Alcibiades got to Sparta, he made a deal with the Spartans. If they would let him stay in Sparta, he would help them win the Peloponnesian War by giving them good advice. The Spartans agreed, and the first thing Alcibiades told the Spartans was that they should build a navy and use it to destroy the Sicilian Expedition.

When this plan worked, the Spartans thought Alcibiades was really smart. Alcibiades also advised the Spartans to lay a permanent siege to Athens, instead of only in the summertime. That worked too.

But after a while, Alcibiades got into trouble in Sparta, too. People said he had been kissing the wife of one of the Spartan kings. He had to leave Sparta quickly.

He helps the Persians instead

This time Alcibiades fled to Persia. The Persian satrap (ruler) of Anatolia (modern Turkey) let him stay there, and now Alcibiades gave the Persians good advice about how to manage the Peloponnesian War.

Near the end of the Peloponnesian War, the Athenians were so desperate that they let Alcibiades come back as their general. But soon they fired him again, and Alcibiades went back to Persia, where he was killed in 404 BC, just as the war was ending. According to one story, his enemies surrounded him in a tavern when he was asleep, and set it on fire, and he leaped out of the flames naked and killed a bunch with his sword, but in the end he was killed.

Bibliography and further reading about Alcibiades: