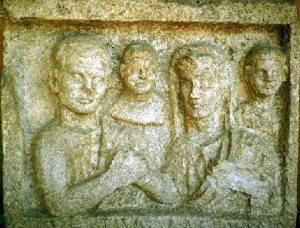 A Roman family on a tombstone

The Roman idea of family included not just a husband and wife and their children, but also the people they enslaved (if they had any), and free employees. So it meant something more like a household, or a family-owned business.

Roman men had a lot of power

Because of this, Roman men had more power within the family than Roman women did – they were like the CEO of the business. Men could legally beat their wives, like their slaves. (Both men and women could beat their slaves, or their children). Men could also decide whether to raise their baby or let it die, soon after it was born. 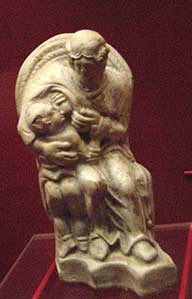 But Roman women also had a lot more power than other women of this time. Roman women could own property, and could buy and sell their property, or rent apartments, without their husband’s permission. They could (like the men) get a divorce if they wanted to, and if they could afford it. And they owned enslaved people and beat them, too.

How many kids did Romans have?

Most Roman families had a lot of children, because so many of the kids died young. The average Roman family had five or six kids, but only two or three of them lived to grow up.

History of midwifery
What is a wet nurse?
Life expectancy in history
Roman inheritance law

The kids that did grow up (both brothers and sisters) would inherit their father’s property when he died, unless he made a will leaving some of it to somebody else.

Because adults also died younger than they do today, and divorce was common, many Romans, like many Americans, lived with step-mothers, half-brothers, and other complicated family arrangements. They did not usually live with their cousins.

Who looked after kids?

Most men and women worked in the fields during the day, or in workshops making pottery or weaving cloth or something like that, so their kids usually were not with them (unless they were working too). Kids looked after themselves, or their older brothers or sisters looked after them, or a grandparent or aunt, or (in richer families) a slave. There were no daycare centers, and most kids didn’t go to school. 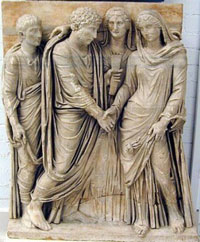 Roman people died much younger than they do now – most people died in their forties or fifties. So most Roman kids never knew their grandparents, who died around the time they were born or when they were little children.

They thought of their grandparents the way you might think of your great-grandparents now. Grandparents were very old people that they hardly knew.

Many younger children lost even their parents before they grew up, and were raised by uncles or aunts, or by their big brothers or sisters.

How old did Romans get married?

Roman people generally seem to have gotten married around the age of twenty (although we are not really sure yet). Some women did marry as young as thirteen. Unlike other societies around the world, most Romans thought it was wrong to marry your first cousin, although some people – especially rich families – did marry their cousins anyway in order to keep their property in the family.

Learn by doing: who is in your family? What other kinds of families do you know of?
More about Roman women