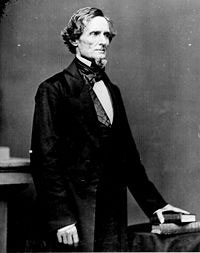 Who was Jefferson Davis?

The white men of the Confederacy elected their own president, Jefferson Davis (but the enslaved African-Americans were still not allowed to vote, and neither were women or anyone who didn’t own any land).

What caused the Civil War?
African-American slavery
All our American History articles

The only hope of the Confederates was to get help from England or France, the way they had in the American Revolutionary War a hundred years earlier. But this time both England and France said no. They would not help any country where it was legal to hold people as slaves.

England, which really wanted a lot of Southern cotton for their cotton mills, did send some guns and ammunition to the Confederacy, but no soldiers. Instead, England started to get cotton from India and Kenya. France got cotton from other countries in Africa. 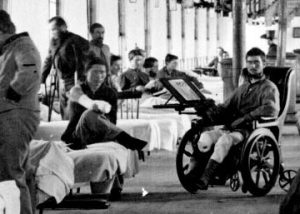 But the Confederates and the United States fought a lot of battles anyway. Hundreds of thousands of men died in these battles, without anything being solved. More Americans died in the Civil War than in any other American war so far.

Many other men lost their legs or their arms or their eyes. All these deaths and wounds were mainly because of the recent invention of cheap steel.

Why was steel important?

Using that steel, people had invented new kinds of guns which were more powerful and more accurate than earlier guns. Using these new guns, it was a lot easier to kill somebody. But generals kept on fighting battles in the old way, with a bunch of men marching along in a long line. The two lines would just shoot at each other until most of them were dead. 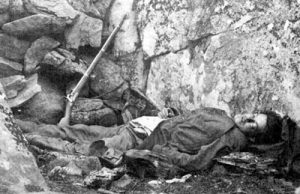 Peanuts and the war

The Civil War got a lot of people to get used to eating different food. Northern soldiers got to like peanuts from being in the South. There was a craze for peanuts in the North. Southern people couldn’t get olive oil or chocolate, so they started to use peanut oil to cook with, and they ate peanut brittle candy.

In the end, the Confederacy ran out of both men and guns. Robert E Lee surrendered to the United States general, Ulysses S Grant, in April, 1865. So the southern states had to remain part of the United States, but not willingly.

Causes of the Civil War
More about slavery