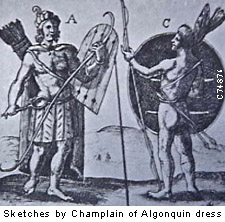 Further south, the Pueblo and Mississippi people also grew cotton for their clothes. Their clothes were less expensive, so they wore more clothing, even though they lived in warmer places. 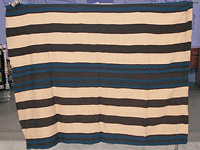 When European explorers and hunters came to North America in the 1500s, many of them also started wearing deerskin clothes, because they were so tough and would last a long time. On the other hand, Iroquois and Cherokee and Algonquin people were very happy to buy wool and linen clothing from European traders. This clothing was lighter and cheaper than deerskins, and easier to wash. People were also happy to buy European glass beads to decorate their clothes, because European and Indian beads were much cheaper than making their own beads out of animal bone or seashells.

During the 1700s AD, as the English settlers in North America began to want to be more independent of England, they began to grow flax for linen and keep sheep for wool so they could make their own clothes. There were too many people now for them to all wear deerskin – there just weren’t that many deer. All along the East Coast, in the English colonies, people were proud of wearing homespun cloth that showed you had not bought from English traders. But English inventors were building machines to spin and weave cloth that made cloth much cheaper. After the Revolutionary War, in 1790, Samuel Slater came from England and built the first automated cotton mill in North America. Three years later, Eli Whitney invented the cotton gin (short for cotton engine), a machine that got the cotton ready for milling by taking the seeds out. 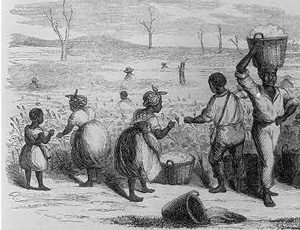 Now that people could mill cotton in North America, they began to grow a lot more of it in the 1800s. Thousands of African people were forced to come to North America as slaves to plant and pick cotton. All over the southern part of North America, on the land that had belonged to the Cherokee and the Mississippians, English settlers and enslaved African people planted cotton. Traders took this cheap cotton all over North America, and so most people began to wear mostly cotton and wool instead of deerskin and linen. You got the cotton plain white and then you dyed it yourself at home, and then you sewed it into clothes. 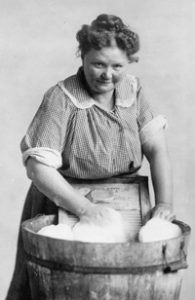 Also in the 1800s, people began to buy more and more of their cloth in stores instead of spinning and weaving their cloth at home (but they still had to sew it into clothes themselves). People used machinery in factories to make store-made cloth, so it was much cheaper than hand-made cloth. People began to be able to afford more than one outfit at a time. By 1900, most people had at least one every-day outfit and one good outfit (for example, to wear to church on Sundays). People started to use cloth for diapers, napkins, tablecloths, sheets, and curtains. Now that people could change their clothes, they also started to wash their clothes more often. Cotton was also easier to wash than wool or linen. Instead of spending time spinning, now women spent their time doing the family’s laundry.

After 1900, pretty much all cloth was made in factories. People began to buy their clothes ready-made, already sewn together, instead of sewing them themselves. With the use of gasoline and coal to power the factories, clothing got cheaper and cheaper, until by the 1920s it was getting pretty normal for people to change their clothes every day.