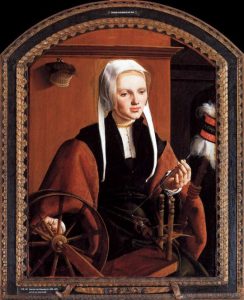 As the weather got colder and colder in northern Europe because of the Little Ice Age, more and more women began knitting wool stockings, gloves, caps, and sweaters. Knitting was also a faster way to make clothes than weaving, and the spinning wheel and knitting combined to allow most people to wear more and warmer clothes than they had in the Middle Ages. People started to have more blankets, rugs, and tablecloths than before, too. Now that they didn’t have to spend all of their time spinning, women were more free to do other kinds of work. 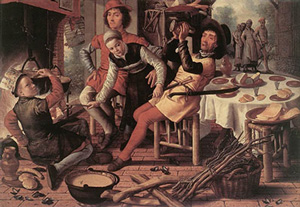 Women still wore long tunics dyed different colors. But women began to wear long linen shirts under their wool dresses, and linen aprons over them. Pockets were little bags that you wore hanging from a belt around your waist.

Men’s tunics got even shorter than they were in the Middle Ages. Men began to wear knitted stockings and linen undershirts and loose shorts under their wool or leather tunics. Men’s tunics got shorter and shorter to show off their fancy stockings – sometimes like mini-skirts, or even shorter, like modern T-shirts and leggings, sometimes with shorts over the leggings, and sometimes not. Both men and women covered their heads with scarves (for women) or hats (for men), or big straw hats if they were working in the sun. Many people, especially children, still went barefoot, even in cold weather. People who had them wore wool stockings and wooden clogs, or leather sandals.

Cotton and Machine-Made Clothing in Europe