American clothing in the 1500s AD 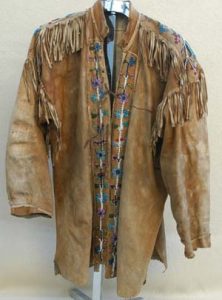 Kids in North America in the 1500s AD wore deerskin dresses or shirts and pants when it was cold, and they mostly went naked when it was warm. Often their moms cut down old worn-out grown-up clothes for their kids to wear, because clothes were so expensive.

Grown-up women mostly wore long, loose deerskin shirts, with deerskin shirts under them, or else long deerskin dresses. Their skirts or dresses came down to their knees or a little longer. These clothes were very expensive, so most women only owned one outfit, and in warm weather women often chose to wear less clothes, or maybe just a grass skirt, to save their deerskin clothes for winter. 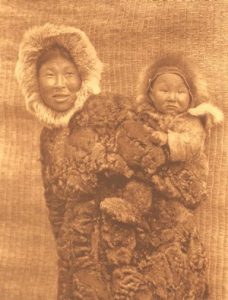 Most men wore tighter deerskin shirts, with deerskin pants under them. But men also went naked, or mostly naked (with just underwear) when it was warm or they were working hard.

In the south-west, though, some Pueblo people wore cotton clothing, which was cheaper and easier to make, and also more comfortable where it was hot. And in the far north, Inuit people wore parkas and anoraks made of sealskin or caribou skin, to keep them warm in the cold weather.

Learn by doing: try on some deerskin clothes in a store
More American styles: the 1600s