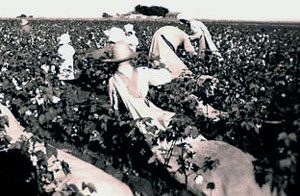 How do people become sharecroppers?

When people didn’t own any land, or they lost their land because of not being able to pay back money or food they borrowed, they often became sharecroppers.

How do people fall into debt?
History of farming
All our American History articles

What is a sharecropper?

This means that they would farm land that belonged to somebody else (usually a rich man, because not very many women owned land). The sharecropping family (both the parents and the kids) would do all the work of plowing and planting and weeding and harvesting, but they would only keep a share of the crop, and the rich man would get the rest of it.

How much did the sharecroppers keep?

When did sharecropping get started?

People have been working land on shares since ancient Egypt. We know about sharecroppers from ancient Rome, and from ancient China and India.

Sharecropping is better than renting land in some ways, because if the weather is bad and you don’t get much of a harvest, you still keep some of what you grew. There’s less risk of starving. But it’s worse than renting because even if you work very hard, you can’t save much money to buy your own land.

Sharecropping after the Civil War

After the Civil War in the United States of America, a lot of freed people who had been working as slaves began working in the cotton fields as sharecroppers. They were better off than when they were enslaved. Nobody could split their family up or beat them.

Sharecropping was better than working for wages, because then the white people would still have been telling them what to do. But sharecroppers were still poor, and it was hard for them to save money to buy their own land. White land-owners liked that, because they didn’t want black people to own their own land.

Many sharecroppers were white

Almost all land-owners were white

Nearly all of the land-owners, though, were white. The white land-owners arranged things so that most sharecroppers could not make enough money sharecropping to buy their food and clothes.

They ended up having to borrow money from the land-owners, and soon they were always in debt. The land-owners said they could not leave the land if they owed money, so in many places share-cropping ended up being a lot like slavery.

Machines and the end of sharecropping

But by the 1940s machines could do most of the work that the sharecroppers had done. Some of the sharecroppers stopped working on farms and moved to the cities to work in factories. Others moved south to Florida to pick oranges and tomatoes, under even worse conditions.

Learn by doing: U-Pick strawberries or tomatoes to try farmwork for yourself
More about the history of cotton

Bibliography and further reading about sharecropping: