Arachne and Athena – the Arachne story in Greek mythology 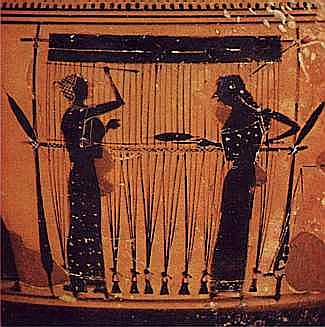 The Arachne story: Greek women weaving at a warp-weighted loom – Athens, 500s BC

Arachne was a girl who lived in Greece a long long time ago (in the story; this is a story). She was a very good weaver and spinner.

Who invented weaving?
Why did women spin?

Arachne wove all sorts of beautiful pictures into her cloth, and people came from all around to see her beautiful cloth. But Arachne was too proud; she had what the Greeks called hubris.

What did Arachne do wrong?

Arachne began telling people she was better at spinning and weaving than the goddess Athena was. Athena was also known as a good spinner and weaver.

Arachne weaving her cloth (from a Corinthian perfume pot, ca. 575 BC)

Athena was mad that Arachne would say that, and she challenged Arachne to a weaving contest.

The two of them set up their looms in the same room and they wove from early in the morning until it got too dark to see (remember there were no electric lights then!). Then they compared what they had done.

What did the goddess Athena weave?

Athena had woven a beautiful cloth showing the gods and goddesses sitting together on Mt. Olympus and doing good deeds for people.

More about the Greek gods

What did Arachne weave?

Need a Halloween costume? Go as Arachne in this spider outfit! Or click for lots more great costumes.

But Arachne thought she was so smart, she wove a cloth making fun of the gods and goddesses, showing them getting drunk and falling down and making a mess of things. Still it was clearly better weaving than Athena had done. But it was so disrespectful! 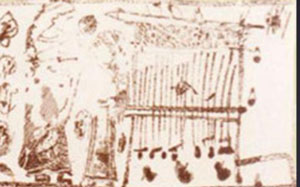 What happened to poor Arachne?

When Athena saw what Arachne had woven, she was even more angry than she had been before. Even though Arachne’s weaving was better, Athena didn’t care.

She pointed her finger at Arachne and suddenly Arachne’s nose and ears shrank up, her hair all fell out, her arms and legs got long and skinny, and her whole body shrank until she was just a little tiny spider.

“You want to spin,” cried Athena, “go ahead and spin!”

What is the moral of the Arachne story?

No matter how skilled people are, they are never any match for the gods. People need to remember their place, and not try to be stronger or wiser or smarter than the gods, or bad things will happen to them. And good women, because that is their fate, should always be spinning.

More about women in ancient Greece

(This version of Arachne’s story is from Ovid’s Metamorphoses. Read about Ovid’s life, and then ask yourself whether Ovid really thought people should know their place.)

Other Greek myths about hubris

To read another myth about hubris, check out the story of Niobe or the story of Tantalus, or Phaethon. Hubris also plays a big part in the Iliad.

Other Greek myths that explain things

Did you find out what you needed to know about the Arachne story in Greek mythology? Let us know in the comments!

Learn by doing: weave a piece of cloth
More about hubris

Bibliography and further reading about Arachne:

D’aulaire’s Book of Greek Myths, by Edgar and Ingri D’Aulaire. (Look under Athena).