Acts of the Apostles – after Jesus 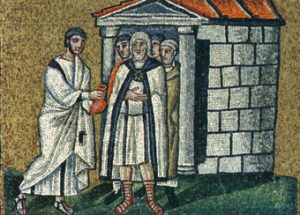 Judas was sorry and tried to give the money back (mosaic from Ravenna, 500s AD) (That’s not in the Acts of the Apostles)

What happened after Jesus was crucified?

After Jesus was crucified (put on the cross), we still don’t have any information except from the Bible for a while. The Bible says that after three days in his tomb, Jesus rose from the dead and appeared to some of his followers, and then rose up into heaven to become one with God. This was the Resurrection, which means “rising back up”.  Later Christians celebrated the anniversary of the Resurrection at Easter every year.

But in the short run, what would happen to Christianity with Jesus gone? Jesus’ followers, left behind on earth, were not sure what to do. One story says that Judas was sorry and tried to give the money back.

Peter denies being a Christian

Another story says that Peter denied being a Christian three times before the rooster crowed the next morning (this story may be related to Zoroastrian ideas about the rooster crowing at dawn meaning the return of light conquering darkness).

More about Zoroastrians
Where do roosters come from? 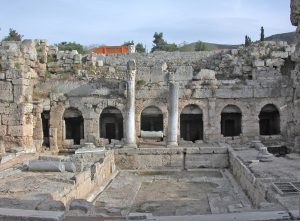 Spreading Christianity around the Mediterranean

The Acts of the Apostles in the Bible says that Jesus’ friends (the apostles) travelled around West Asia and other parts of the Roman Empire preaching the things that Jesus had told them. Often they preached in synagogues. The apostles also said that when Jesus was crucified, he sacrificed himself for everybody else who believed in him.

What is a synagogue?
Who was St. Paul?
St. Paul in Corinth
The end of sacrifice

So now the Jewish animal sacrifices were not needed anymore. Sometimes when the apostles came to a town, people were glad to listen to what they had to say. Some people even became Christians (followers of Christ) themselves. Sometimes the people didn’t like these new ideas and threw the apostles out of town.

Learn by doing: read some of the Book of Acts for yourself
More about Paul
More about Christianity