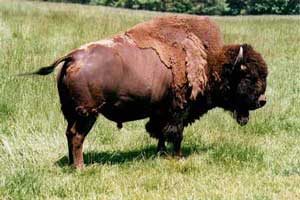 Bison (we used to call them buffalo) are a kind of cattle, like cows. Like other cows such as the aurochs, bison came originally from Asia, and they probably travelled over a land bridge to get to North America.

When did bison come to the Americas?

This might have been around 10,000 BC. The bison replaced an earlier kind of bison, much bigger. Those big bison had become extinct, probably because of climate changes and human hunting, at the end of the last Ice Age.

The big open grassy plains of North America were just what bison liked. Soon there were millions of bison in North America, anywhere that there was grass, from what is now eastern Oregon all the way to the Great Lakes, and from Canada down south nearly to Mexico. But when the bison arrived, they ate the grass American horses had been eating, and they sheltered in the valleys where horses had sheltered from the cold. So horses became extinct in the Americas.

Before 1500 AD, only a few groups of people – mainly the Blackfoot and the Shoshone – hunted bison much. It was too hard to chase them, without horses. You had to chase them so that they would run off cliffs or get trapped in valleys, and then you could kill them. After about 1000 AD, the Crow also started to hunt bison sometimes.

The Blackfoot
The Shoshone
And the Crow

Thousands of years later, the horses came back. Once the Pueblo people captured horses from their Spanish invaders in the late 1600s AD, people were quick to see that this meant a great new source of food – with horses, people could hunt bison easily.

The Pueblo Revolt
The Sioux get horses
The Comanche and horses

By 1700, British and French settlers were pushing many tribes, like the Sioux, the Crow, the Cheyenne, and the Ute, off their usual land and on to the Great Plains. Here these people stopped farming, bought horses from the Pueblo people to their south, and used them to hunt bison.

But it wasn’t sustainable

This worked okay during the 1700s. But it couldn’t work forever: in the wintertime, Plains people had to shelter themselves and their horses in the canyons. But that had also been the bisons’ shelter.

The Cherokee
And the Shawnee

Once people and horses were there, the bison couldn’t shelter in the canyons anymore. They had to stay up on the open prairie. Many of the bison died of cold and starvation in the winters. And the United States was pushing more and more Native people to the Great Plains, like the Cherokee and the Shawnee. These people had been farmers; they didn’t know that much about horses, or bison.

The United States killed the bison

Then in the 1800s, the railroad brought many white Americans to the West, and they saw the great herds of bison for themselves. These Americans wanted to conquer the West from the Sioux and the other people who lived there, and they realized that if they killed all of the bison it would make it much harder for Native people to live on the Great Plains.

A pile of bison skulls waiting to be made into fertilizer. Courtesy of the Burton Historical Collection, Detroit Public Library.

So the Americans began to kill off all of the bison. They killed them in huge heaps, not even taking the heads or the skins or the meat, just leaving them there to rot. When people began to really kill the bison, their bodies piled up across the Plains. By the 1880s only a few hundred bison were left in North America.

Today scientists are trying to bring back the bison. There are some growing herds on the Great Plains, protected by law. Many Native people, especially the Blackfoot and the Sioux, are working to help the bison have more bison babies and raise them safely.

Did you find out what you wanted to know about bison history? Let us know in the comments!

Learn by doing: go see bison in a zoo or a preserve
More about the Sioux