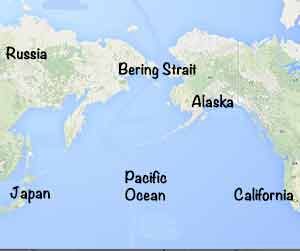 Bering Strait – today there’s ocean, but long ago there it was the Bering land bridge

During an Ice Age, when the world is colder, more of the world’s water freezes into ice. So less water is in the oceans than before. This makes the level of the oceans lower, like the water in your bath is lower if you let some out. Because the ocean level is lower, more of the land sticks out, like your knees in the bath.

Find out about ice
What is an Ice Age?
Native Americans articles 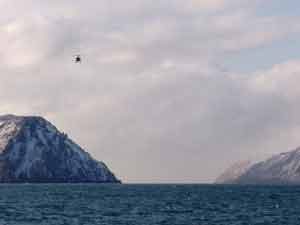 The Bering Strait today, with the land bridge underwater

So more land stuck out

During the last Ice Age, about 12000 BC, the Bering land bridge joined East Asia and North America, leading from Siberia to Alaska, and most archaeologists think that some people and dogs crossed over this land bridge and began to live in North America at that time.

The people who crossed on the land bridge probably got stuck in Alaska for quite a while, because giant glaciers were blocking the way south. They could only walk south after the Ice Age ended, when the glaciers melted.

Learn by doing: On a globe, trace the path people followed from Africa to South America
More about the Paleo-Indians

Bibliography and further reading about ice ages and land bridges:

More about the Paleo-Indians
Quatr.us home