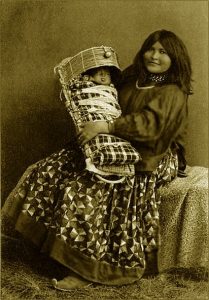 An Apache woman holding a baby in a cradleboard

Most kids in North America lived with their mothers and fathers and brothers and sisters. Most families lived in one room of a pueblo, or one tipi or hogan or wickiup. Because a lot of kids died of sicknesses, you usually had a lot of brothers and sisters. That was to make sure that some of them would grow up. Iroquois and Chinook kids lived in longhouses. They lived with their grandparents (if they were still alive), and with their aunts and uncles and cousins. As in medieval Europe, most people kept their babies swaddled. They carried babies around using a wooden cradleboard, at least until they were old enough to crawl.

When a girl got to be a teenager, she usually got married. When people got married, they gave each other gifts of food. A bride gave her husband corn or corn bread. He gave her venison (deer meat) or some other kind of meat. If she lived in a small house like a tipi or a hogan, the young married people would set up their own house. If she lived in a longhouse, she didn’t move out of her mother’s house. She stayed home, and her husband moved in with her family. Sometimes a man had more than one wife, but usually women only had one husband.

If married people got divorced later, the dad would move back to his mother’s house or his sister’s house, and the children would stay with their mother in her house.

Women in North America had more power and freedom than women in Europe or Asia at the same time. Women owned their own houses and their own stuff. They could get divorced whenever they wanted to, and they could keep their kids with them if they did get divorced.

You might think that because everyone in North America was a Native American there would be no racism at this time. It’s true that Native Americans didn’t treat people differently based on the color of their skin. But they often did treat people from other cultures badly. Navajo people thought they were better than Ute people, and Ute people thought they were better than Navajo people. Pueblo people didn’t get along with Navajo people, and the Iroquois were always fighting with the Algonquin. All of these people used to capture people from their enemies and force them to work for them as slaves.

Because people didn’t always get enough food, and they didn’t have much medical knowledge, most people in North America at this time died of old age in their forties or fifties (just like in Europe, Africa, or Asia at this time). So most kids never knew their grandparents, and by the time they grew up they often had lost one or both of their parents too. Teenagers often had to take care of themselves.

Bibliography and further reading about North American people before 1500: