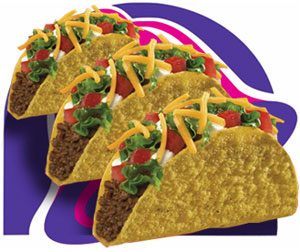 Tacos with refried beans inside (thanks to Taco Bell)

You’ve probably already eaten refried beans lots of times, but if you haven’t, why not start now by having a taco with refried beans in it for lunch or dinner?

There are lots of Mexican restaurants all over the United States where you can get a taco. You can do it as simply as Taco Bell or Chipotle, or you can go to a fancier place. Remember, though, that early Central Americans only had corn tortillas, not wheat ones, so order corn!

Refried beans from scratch at home

Or make refried beans for yourself at home. Just take a cup of dried pinto beans and soak them in water overnight. About an hour before dinner, put them on to boil with plenty of water, and boil them (covered) until they are soft all the way through.

When the beans are soft, drain most of the water off. Heat some cooking oil in a frying pan and saute a chopped onion with some salt and cayenne. When the onion is soft, add the beans and a little of the bean water, and stir them and mash them until they turn into refried beans, about five minutes.

Refried beans in a can – easier!

If this seems too hard, you can also buy cans of refried beans already cooked. Just open the can, pour the beans into a bowl, and reheat them in the microwave. Then you can use them to fill a corn taco, like the ones in the picture, and sprinkle chopped tomatoes, peppers, cilantro, and cheddar cheese on top (but really the Aztecs did not have either cilantro or cheddar cheese!).

Did you enjoy this cooking project? Let us know in the comments.