History of fishing since the Stone Age

When did people start fishing? 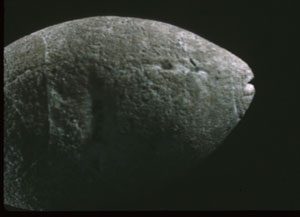 History of fishing: Stone carving of a fish (San Francisco, ca. 7000 BC)

People probably began fishing in Africa, very early on in human history. Neanderthals were fishing by about 200,000 BC. Modern humans were gathering shellfish at Blombos Cave in South Africa by about 100,000 BC.

Fishing spreads around the world

The first people who left Africa, about 60,000 years ago, may have been following schools of fish along the African coast, then over to the Arabian Peninsula and along the coast to Iran, India, and further east, eventually following the fish to China, Japan, and the Americas. All over the world, where there’s good fishing, there are cities. 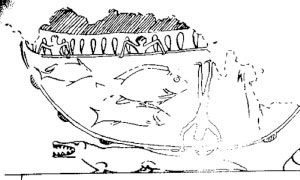 History of fishing: Fisherman diving for his net (Grave of D2rj, Thebes, Egypt, ca. 2000 BC)

Fishing was super important for early people, and a lot of our early inventions happened around fish.

Fishing nets: About the same time, they may have invented or improved spinning and early forms of knitting in order to make fishing nets.

History of spinning
When was knitting invented? 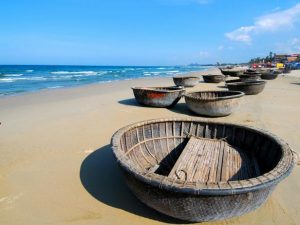 Fishermen’s wicker boats on the beach at Danang, in Vietnam

Swimming: Maybe people learned to swim in order to catch fish, too.

Atlatl: Maybe they invented the atlatl to spear fish.

More about the atlatl

Boats: Fishing people may also have invented canoes or boats made of bundles of reeds, sometime before 50,000 BC.

History of salt
When did people learn to make fires?

Japanese people, who ate a lot of fish, made the first pottery jars, about 14,000 BC, to preserve fish by fermenting it. By 6000 BC, people in Brazil were also using pottery jars to ferment fish.

More about early pottery
The Stone Age in Japan
What was going on in Brazil? 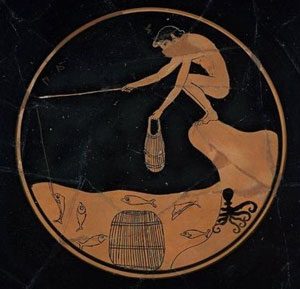 History of fishing: A boy fishing with a pole and lifting out a crab trap (Athens, 400s BC)

How did early people catch fish? (History of Fishing)

Just like today, early fishing people attached stones or bits of clay or lead to the bottom of the net to weight it down (so it wouldn’t float), and they attached bits of wood or bottle gourds to the top (so it would float).

A group of people would wade out into the ocean someplace where it was pretty shallow, and when they were out as far as the fish they would spread out the net, and walk forward.
After a while, the people on the end would walk towards each other and close up the net, and they would all carry it back to the shore. People fished this way in ancient Egypt, for example, when the Nile flood left many fish stranded in shallow pools of water between August and October. Probably the same thing happened in ancient Sudan, further south. There was another fishing season in May and June, at the end of Egypt’s dry season, when shallow pools of water made fishing easy. Mostly they caught catfish.

More about the Nile flood 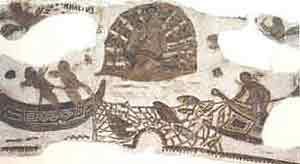 If the water was deeper, you could also fish from small wooden boats or boats made from bundles of reeds, by dragging the net behind you for a while and then pulling it up into the boat. In Egypt, people caught perch this way.

This is what Peter was doing when he first met Jesus, and that is what the people are doing in the Roman mosaic on this page. That’s fine for fishing close to the shore. 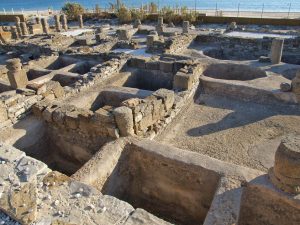 History of fishing: A Roman garum factory near the beach in Spain, where workers salted and fermented fish.

By the time of Jesus, though – and even centuries earlier – that’s not what most fishing looked like. Instead, organized industrial fishing companies caught a lot of deep-sea fish like tuna and salmon.

How did the Romans preserve fish?

These big fishing boats brought tons of fish to shore during the big tuna and salmon runs, and then processed them into fermented fish sauce in big industrial garum factories.

Looking for a second source to cite? Check out this great article!

Did you find out what you wanted to know about the history of fishing? Let us know in the comments!

Learn by doing: Go fishing! (but be sure to get permits).
More about early boats

Bibliography and further reading about fishing:

Dietrich Sahrhage and Johannes Lundbeck, A History of Fishing (1992)