Who were the Chavin? South American history 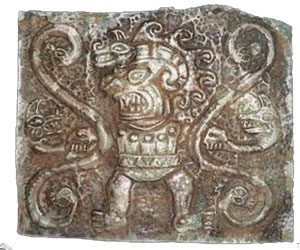 From Norte Chico to Chavin

Who were the Norte Chico people?
What about Valdivia further north?
History of potatoes
All our South America articles

What did Chavin people eat?

Chavin people also farmed corn, but they really ate mostly potatoes and quinoa, which grow better high in the Andes mountains. Hunters shot deer with spears and with bows and arrows. Herders kept guinea pigs for their meat. Gatherers kept on eating shellfish and hunting seals, and probably preserved fish as they had earlier. And like earlier people, the Chavin people chewed coca leaves.

The Chavin people built a big stone temple at the city of Chavin de Huantar. They still didn’t know how to really build stone buildings with a roof, so this temple is mainly solid, like the pyramids in Egypt or ziggurats in Iraq or stupas in India – it’s a pile of dirt with stone walls on the outside.

El Lanzon, a giant pillar in the Chavin temple caves – was it meant to scare visitors?

This temple helped the rich people keep control of everybody else by scaring people who visited it: the temple has caves and tunnels under it, so that in the rainy season the echoes sound like a giant jaguar is roaring at you. (Compare this to the Indian rock-cut temples at Ajanta, a little later.) Chavin temple priests seem to have encouraged the use of psychedelic cactus, too.

More about Ajanta in India

After a terrible tsunami struck the Pacific coast of Peru about 500 BC, the Chavin took control of the towns that the tidal wave had destroyed. Probably the Chavin were united into a state, because there were lots of different towns that shared the Chavin culture, and they didn’t build city walls to protect themselves the way city-states would.

Around the same time, the Chavin began to keep llamas as farm animals, for their meat and for their hair (to spin into cloth), and as pack animals. Maybe thanks to the llamas, they began to trade more with their neighbors across the Andes, the Tupi. Around 250 BC, the Chavin people developed into the Moche culture (in northern Peru) and the Nazca culture (in southern Peru).

More about llamas
What’s the Nazca?

Go on to the Moche culture

Bibliography and further reading about the Chavin people: