Who are the Mapuche? South American history 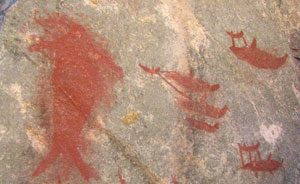 When did people first reach Chile?

There were probably people living in Chile (a narrow strip of land in South America between the Andes Mountains and the Pacific Ocean) by around 12,000 BC. They came south with their dogs along the coast of South America, either walking or in small boats.

Like most other people in South America, they lived mainly by fishing, hunting seals, and collecting shellfish and seaweed. We call these people the Changos. Different Changos families specialized in fishing for particular kinds of fish. Like other fishing people, the Changos made pottery to ferment their fish in, and maybe for other reasons too.

History of pottery
History of fishing
What is a mummy?

As in ancient Egypt, Chile’s very dry climate caused many dead bodies to naturally become mummies, and when Changos people died, the Changos, like the Egyptians, learned how to make their bodies into mummies on purpose.

Changos trade with the Guarani

The Changos traded with people on the other side of the Andes mountains. They traded dried fish, shells, and seal skins for vicuna wool, fruit, corn, cocoa, and peanuts.

History of peanuts
The Andes Mountains

When did the Changos start farming?

By about 8000 BC, the Changos were growing their own peanuts. Eventually the Changos settled the river valleys leading up into the Andes Mountains. By about 4000 BC, they kept tame alpacas. They wove wool clothing from the alpaca wool.

Where do alpacas come from?

About 600 or 500 BC, the Changos organized themselves into the Mapuche culture (or the Mapuche people may have come over the Andes, possibly pushed out by the Guarani, and conquered the Changos).

Who were the Guarani?
Where did corn come from?
How about sweet potatoes?
And coca leaves?

Like the earlier Changos, the Mapuche farmed some of their food and fished a lot. The Mapuche grew corn, beans, potatoes, chili peppers, peanuts, sweet potatoes, squash, and tomatoes. They chewed coca leaves as a stimulant and to prevent altitude sickness in the high mountains. They also kept guinea pigs for their meat, and raised llamas. 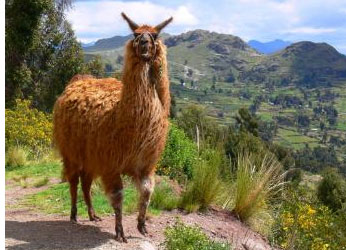 Mapuche families measured their wealth according to how many llamas they had. That was because trade with other people was how you got rich. Families traded the wool cloth they made from llama wool. In exchange, they got cacao (chocolate) from rainier climates further inland. 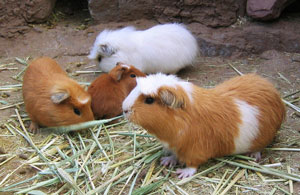 Their leaders, caiques, generally ruled only their own village. So many independent villages led to a lot of wars, and Mapuche people spent a lot of time fighting. They fought with wooden clubs and bows and arrows. Their doctors got good at setting broken bones and dislocations from all these battles!

The Inca attack the Mapuche

In 1470 AD, the Inca attacked the Mapuche, but the Mapuche fought them off in a great battle. In 1540, the grandchildren of the men who had fought the Inca off met the first Portuguese invaders.

Bibliography and further reading about the Mapuche: