In the 1530s AD, the Mapuche people in Chile had recently fought off an Inca invasion and were fiercely determined to stay independent. And the Mapuche were good at fighting! So when the first European colonizers came to Chile, the Mapuche fought them off, too. Mapuche people quickly got Spanish horses and steel knives and spears, and learned how to use them in battle.

It was harder to fight off European sicknesses. About half of the Mapuche died in the 1500s of smallpox, measles, dysentery, and other new diseases. By 1541, a Spanish general, Valdivia, was able to start a colonial city, Santiago de Chile, about halfway down from the Peruvian border to the tip of South America. Valdivia started to enslave local people and force them to work on big farms owned by Spanish families. But the Mapuche kept on fighting. A Mapuche leader, Lautaro, killed Valdivia. By 1600, the Spanish gave up and left most of the southern half of Chile to the Mapuche.

In the north, Spanish families kept their big farms and grew food for Spanish settlers further north in Peru. They brought Catholicism to Chile and many Native people became Christians. In the south, Mapuche people (also called Araucanians) kept on fishing and farming and fighting small wars with each other as they had before.

When the French general Napoleon made his brother Joseph king of Spain in 1810, some of the rich Spanish families decided to revolt and make Chile an independent country. Others didn’t want independence, and there was a civil war that lasted until 1818. Many poor Native people died fighting, even though this was mostly a war between rich Spanish people. But then Chile was independent.

What sort of government would Chile have now? Some people wanted a republic like the one the French Revolution had set up. In 1823, Chile ended slavery. Reformers tried to end the power of the Church, and wanted to redistribute the land. But the rich Spanish families hated these ideas. By 1833, Chile got a government for the rich families, instead. That ended the fighting. Chile was able to modernize. American engineers helped to build railroads, ports, and telegraph lines. Chile began to trade more with the rest of the world, and got richer. By the end of the 1800s, Chile used their modern weapons to conquer the Mapuche in the south. Most people in Chile spoke Spanish now. 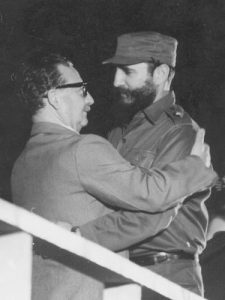 Salvador Allende of Chile hugs Fidel Castro of Cuba, about 1970

In 1970, Chile elected a Marxist, Salvador Allende, and became close to Communist Cuba and China. But only three years later, the general Augusto Pinochet killed Allende, and made himself dictator. Pinochet stayed in power by killing and torturing thousands of Chilean people. But in 1989, he lost a vote and gave up his power. Democratic government got started again. 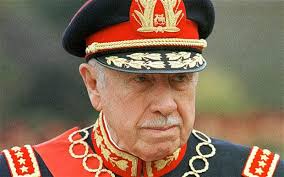 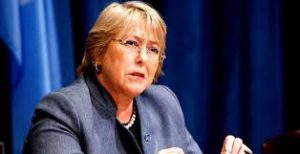 Chile does more trading with other countries now that it has  trade agreements with the European Union, China, and the United States. Because it is summer in Chile when it is winter further north, all of these places want Chilean vegetables and fruit.

In 2006, the socialist Michelle Bachelet became the first woman to be president of Chile. She made trade agreements too. In 2010, Chile re-elected Pinera, and then in 2014 Bachelet was elected again. She worked to provide better education and more equality in Chile. But in 2018, Pinera was elected again.

Bibliography and further reading about the history of Chile: